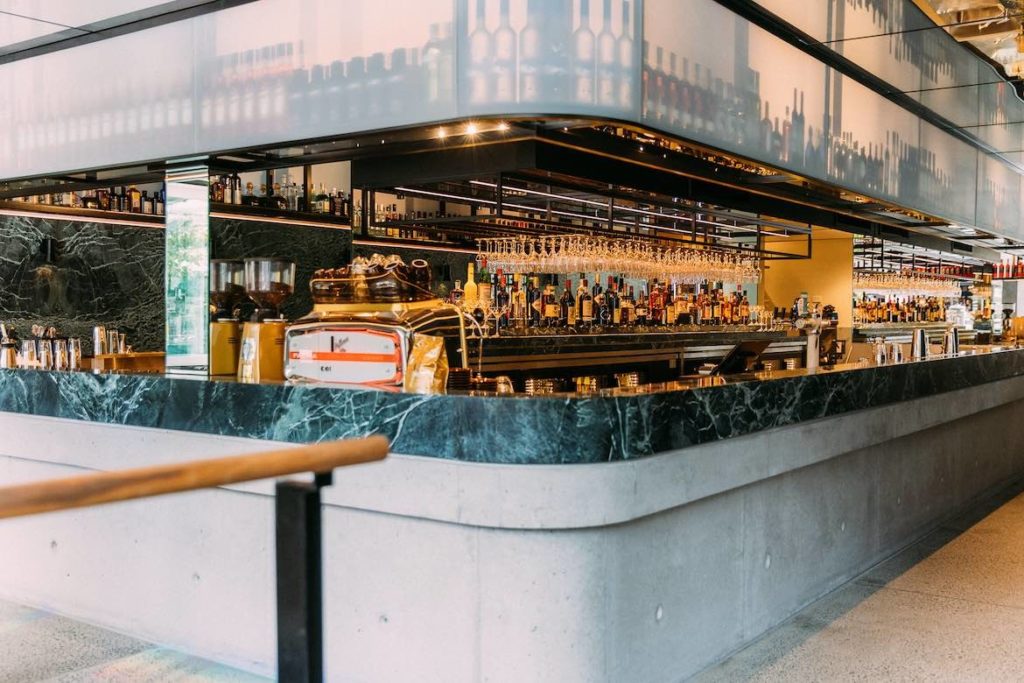 Gemelli, a family-style restaurant, has made its mark in Queensland, with a couple of venues on the Gold Coast and now, with a new venue in Brisbane’s Fortitude Valley.

Until now, the owners, twin brothers Alec and James Gemelli had worked with designer/drafting companies and were again close to following this trajectory when the landlord of the Brisbane building on the corner of James and McLoughlin streets, suggested they contact architects Hogg & Lamb.

A key location, surrounded by upmarket restaurants, cafes and boutiques, it was decided to create a sophisticated yet family-friendly offering.

Formerly a bar and clothing store separated by a slightly subterranean link, the brief to Hogg & Lamb was to create Gemelli on one side of this passage and on the other, a more sophisticated bar, named Tano.

“We were handed the rough layout by the Gemelli brothers and asked to come up with a scheme,” says architect Greg Lamb, who was given a fairly open brief.

While the ground floor corner site, with car parking above, is a prominent location, it suffered from poor access and also different levels, an issue that would be problematic for disabled access.

Hogg & Lamb’s first task was to create a more seamless path to both the restaurant and bar, as well as opening up the restaurant to those strolling by.

“The problem is that it’s a fairly busy thoroughfare and we wanted to create a comfortable as well as intimate space for diners, even if there are family groups with young children,” says Lamb, who touched the original building lightly, inserting bi-fold glass doors that can opened up during the warmer weather.

As the floor levels varied, the architects created a mezzanine area and used a couple of gentle platforms to define the main dining area (all easily accessible).

Keen to establish a slightly Mediterranean feel given the Italian fare served at Gemelli, there’s an abundant use of timber in the main dining area, with a generous dose of terracotta tiling used for the mezzanine in the form of flooring and also to construct the banquette seating on the periphery.

“The mezzanine certainly takes on the feel of a verandah,” says Lamb, pointing out the raw and relatively low concrete ceilings (only 2.4 metres in height).

In the main restaurant, Hogg & Lamb used timber extensively, both to conceal the acoustic-lined ceilings and also for the arched timber apertures that frame the main dining area.

“Initially, we didn’t want to go with the arches, given they’ve been overused in recent years. But we were mindful of still creating that Italian sensibility. It just felt right in this context,” says Lamb, who likens the result to some of the small and intimate Italian churches one often chances upon in Italy.

For a completely different experience, and catering for a different cohort, Tano – Gemelli’s first bar – has an urban and sleek ambience. Complete with mirrored ceilings to create a sense of greater height and space, and a central bar that’s been almost art directed with beautifully lit shelves above, it’s the ideal place to catch up with friends after work or before having a meal next door.

“At the end of the day, it’s important for the brothers to take ownership of this place. Something that they feel as comfortable with, as their patrons,” says Lamb, who enjoys seeing how this corner has been invigorated in this hip part of town.

Personalization And Versatility As The Trend Of The Future

The Rise Of Next – Gen Smart Campus