Housed in a newbuild designed by Shim-Sutcliffe Architects, the property features locally inspired interiors by Ace’s in-house design team, as well as a signature restaurant – Alder – helmed by acclaimed chef Patrick Kriss, who will also take charge of a yet-to-be-named rooftop bar and lounge debuting later this summer.

The hotel is located in the Garment district just blocks from music venues Horseshoe Tavern and Velvet Underground, the Art Gallery of Ontario and Toronto Film Festival’s HQ, together with the city’s artistic, cultural and recreational public space. As such, it reflects the area’s past through a prismatic and future-facing vantage, preserving its layered legacies and adding texture through design. Intentionally crafted as a civic space, the property stands both in homage to and in dialogue with the neighbourhood it inhabits.

“We’ve long admired Toronto, a free-thinking city and international cultural capital, and we are thrilled to open our first Canadian home here,” says Brad Wilson, CEO of Ace Hotel Group. “Ace Toronto is housed in a building inspired, both in design and ethos, by the electricity and independence of this remarkable place. Along with our brilliant collaborators, including Shim-Sutcliffe and chef Patrick Kriss, we have created a site that reflects the city’s legacy as a global meeting ground and aims to actively share in its future.” 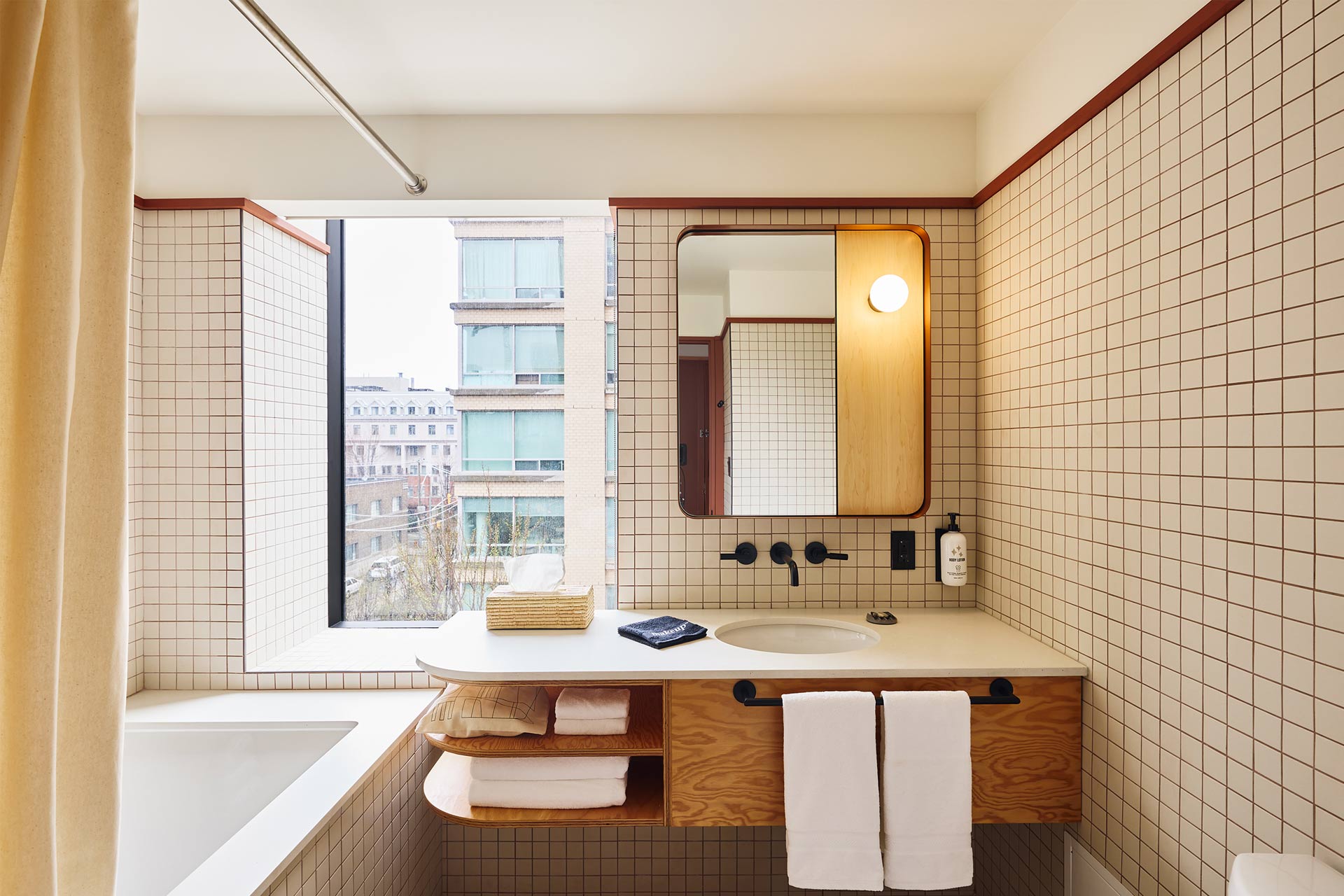 Upon entering, guests will be greeted by a suspended lobby overlooking St. Andrew’s Playground Park – the site of the city’s first green patch devoted to children’s play. The public spaces are defined by an honest and refined material palette of concrete, clay, copper and wood, which is echoed throughout the guestrooms too.

Bespoke furnishings and lighting have been custom-designed by Atelier Ace and Shim-Sutcliffe Architects to bring tangible comfort to the building’s design, and playfully intermix with vintage furniture sourced locally in Toronto. Original artworks by primarily Torontonian artists will also offer reflection and joy across the hotel, while the guestrooms, conceived as urban cabins to offer respite from the city, feature deep-set window benches that invite conversation and closeness, and grant sitters bird’s-eye views of the park below.

Brigitte Shim, co-founder of Shim-Sutcliffe Architects, comments: “Our intention with was to make a positive contribution to our city, a welcoming civic space where both locals and guests feel equally at home.”

Raffles to debut flagships in Boston, Jeddah and Macau this year

Sharing ideas for anyone who wants to renovate or is thinking of building ...
Uncategorized

Share ideas for detached houses in different styles that is a house that ...
Uncategorized

Tropical Open Roof House With A Courtyard Garden And Fish Pond. Like An Oasis!

For anyone who is thinking of making a house that is beautiful, modern, ...

One-Storey House “Mini Container” With A Completed Functions. On An Area Of ​​100 Sq.m.

Minimal style home decoration that many people love will focus on simplicity use ...
Uncategorized

Sharing ideas for different styles of detached houses, various styles that is a ...
Uncategorized

Building a house and decorating it in a minimalist style. This style emphasizes ...