For its Middle Eastern debut, Hotel Indigo journeys from Dubai’s past as a trading post to its present as a hub for art, fashion and design, writes Sleeper’s Editor-in-Chief Matt Turner.

Stories of Emirati culture and heritage, past and present, are interwoven throughout Hotel Indigo Dubai Downtown. Interior design consultancy Dsgn has fused traditional references with contemporary influences in a fitting response to the property’s location, at the point where the historic Dubai Creek meets the Business Bay and Design District neighbourhoods that increasingly define the city’s future.

Like the rest of IHG’s Hotel Indigo portfolio, the brand’s Middle Eastern debut doesn’t subscribe to a cookie-cutter design aesthetic, instead priding itself on individuality and leaving no doubt as to the location where guests are resting their head.

Developers Sunflower FZE have also made every effort to distinguish the hotel from its glitzier, more anonymous competitors, to the extent that the Dubai Department of Tourism & Commerce Marketing (DCTM) made it one of the only developments of its kind in the Emirate to be awarded its ‘Boutique’ classification.

The respect for local arts and culture is apparent on arrival. In the lobby, a digital artwork by Turkish-American designer Refik Anadol entitled ‘Wind of Dubai’ stretches along the wall behind the reception desks, with an algorithm based on the city’s weather patterns creating an ever-changing, data-driven backdrop. Even the reception desks themselves reference local culture; one is carved in deep walnut, conjuring images of the large wooden gates in the Emirati homes of Nad el Sheba. Another has a metal lattice pattern inspired by the face coverings worn by Emirati women, whilst one more has a mother-of-pearl inlay as a nod to the pearl-diving industry on which Dubai was founded.

In the corridor leading to the Open Sesame restaurant, dhow boats, traditionally used for pearl-diving in the Creek, are repurposed to function as lobby seating. Majlis fabric adorns a bedouin-inspired chandelier overhead. Even the traditional handmade rugs underfoot have a story to tell, having come into being thanks to the support of the Fatima Bint Mohamed Bin Zayed Initiative – a charitable foundation established to empower low-income Afghans.

The entrance to Open Sesame is perhaps the hotel’s most Insta-worthy moment, clad in fabrics by French fashion designer Christian Lacroix and framing the perfectly composed seating arrangement beyond. The restaurant itself is styled as a pop-up market, with souk-inspired stalls and embroidered abaya patterns in the entrance. A loose combination of furniture can also be rearranged to create alternative spaces, allowing for exhibits, fashion shows and all-day dining.

Elsewhere on the ground floor, the Bakala Jooos juice bar, bookshop and concept store are surrounded by creative artwork, from a printed wallpaper commissioned by artist Daniel Wegera to woven tapestry rugs. Juices are created using fruit and vegetables from Emirates Bio Farm, whilst guests can purchase artworks displayed around the hotel from the concept store.

In the adjacent Off The Wall bar, the design takes cues from the nearby culturally-eclectic district of Satwa. An installation by local artist Max Cramatte dominates, alongside graffiti by South African-born creative Paul Bruwer and Syrian artist Baseem Rayyes. The pan-Asian menu offers cocktails and light bites inspired by street food and hawker markets of the Far East.

Moving up into the guestroom floors, the emphasis shifts from a historic vision of Dubai to a more contemporary one hooked around the city’s future as a hub for art, design, fashion and jewellery. Artworks adorning the corridors include over 200 pieces curated through associations with the Alserkal Cultural Foundation, Tashkeel and XVA Gallery.

Each floor is dedicated to one artist – not only locals such as Badr Abbas, but also Dubai-based expatriates like Zahra Gulraiz – a British UAE resident who mixes colourful Pop Art style with traditional Arabic calligraphy. The carpets along the corridors also feature subtle references such as the iconic Burj Khalifa and hanging lanterns imprinted into their weaves. 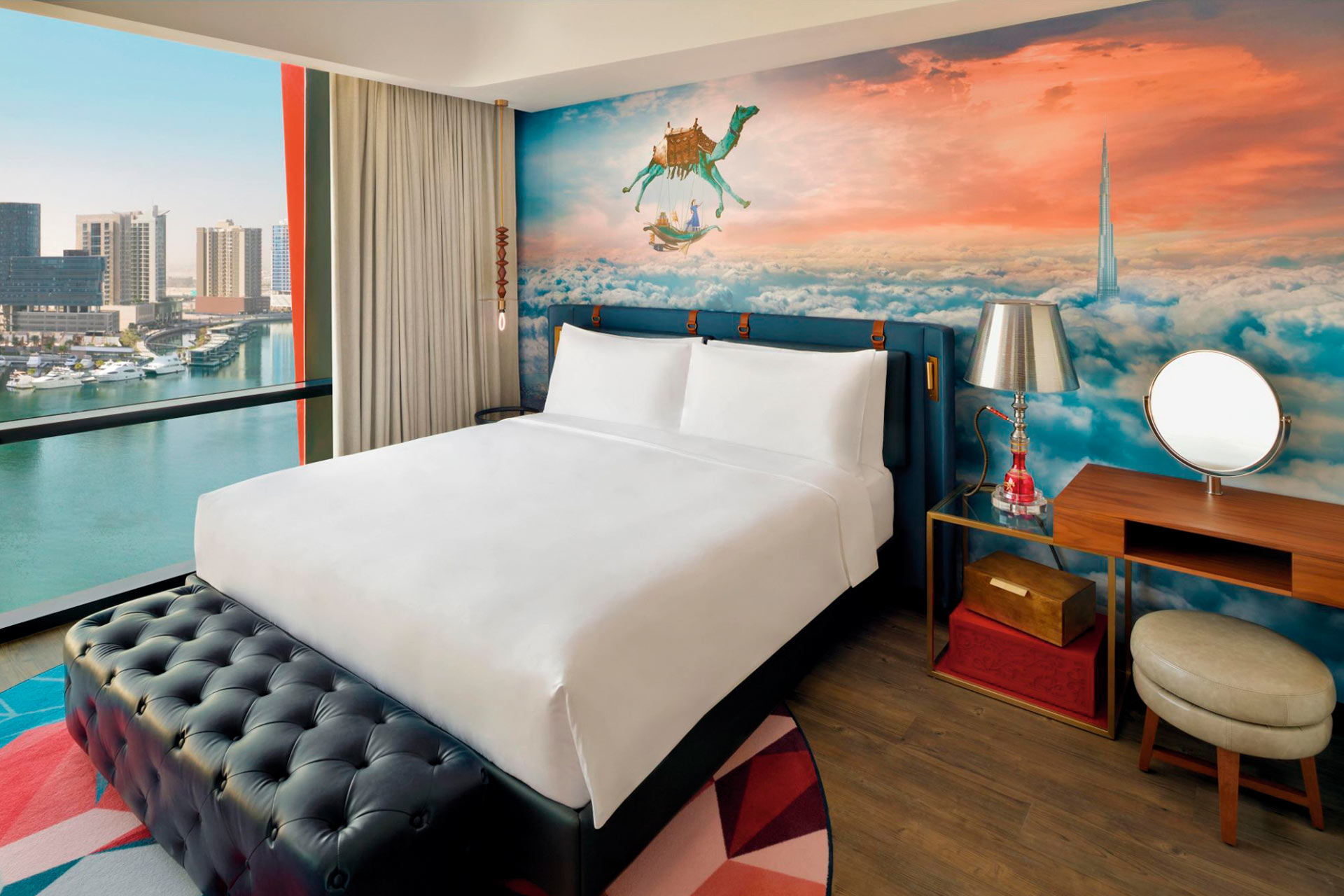 Guestroom interiors are designed according to two distinct themes: ‘art and design’ or ‘fashion and adornment’, with bespoke rugs by Ege Carpets providing a key point of distinction between the two. All rooms feature an eclectic mix of local and international designers, artists and suppliers. Dubai’s role as a key trading hub for the region is playfully expressed through elements of recycled timber, casegoods based on quirky interpretations of vintage chests, walls stamped ‘fragile’ and headboards reminiscent of old-fashioned suitcases, buckled shut. Lamps based on shisha pipes provide another immediately recognisable local touchpoint. The views outside are echoed in the feature wallpapers behind the bedheads, while in the Creek-facing rooms, a surrealist mural spans the wall, depicting the cloudy sky at sunset – complete with flying camel.

Bathrooms meanwhile were kitted-out by Sanipex, whose brief specified that materials needed to emulate the surrounding environment: “To create a modern yet authentic local look and feel, a variety of products were brought together in the full bathroom supply,” say the group. “The modern cross-handles of a bespoke-finished bronze basin mixer blends the lines between modern and traditional, contrasting beautifully against the mother-of-pearl finish mosaics. The warm metallic tone of the copper hammered inset basin and vintage bronze basins both complement the carved wooden stands too and emulate the sand dunes of the surrounding desert.”

Rounding out the offer, the suites provide generous spaces with added luxury thanks to designer furnishings by Moroso. Floor-to-ceiling windows overlook envy-inducing views, be it towards the Dubai Canal, the nearby Design District or the shimmering skyline beyond.

Whichever way guests look at this hotel, it is hard to avoid a sense of Dubai’s rich past and ever-evolving future coming together. 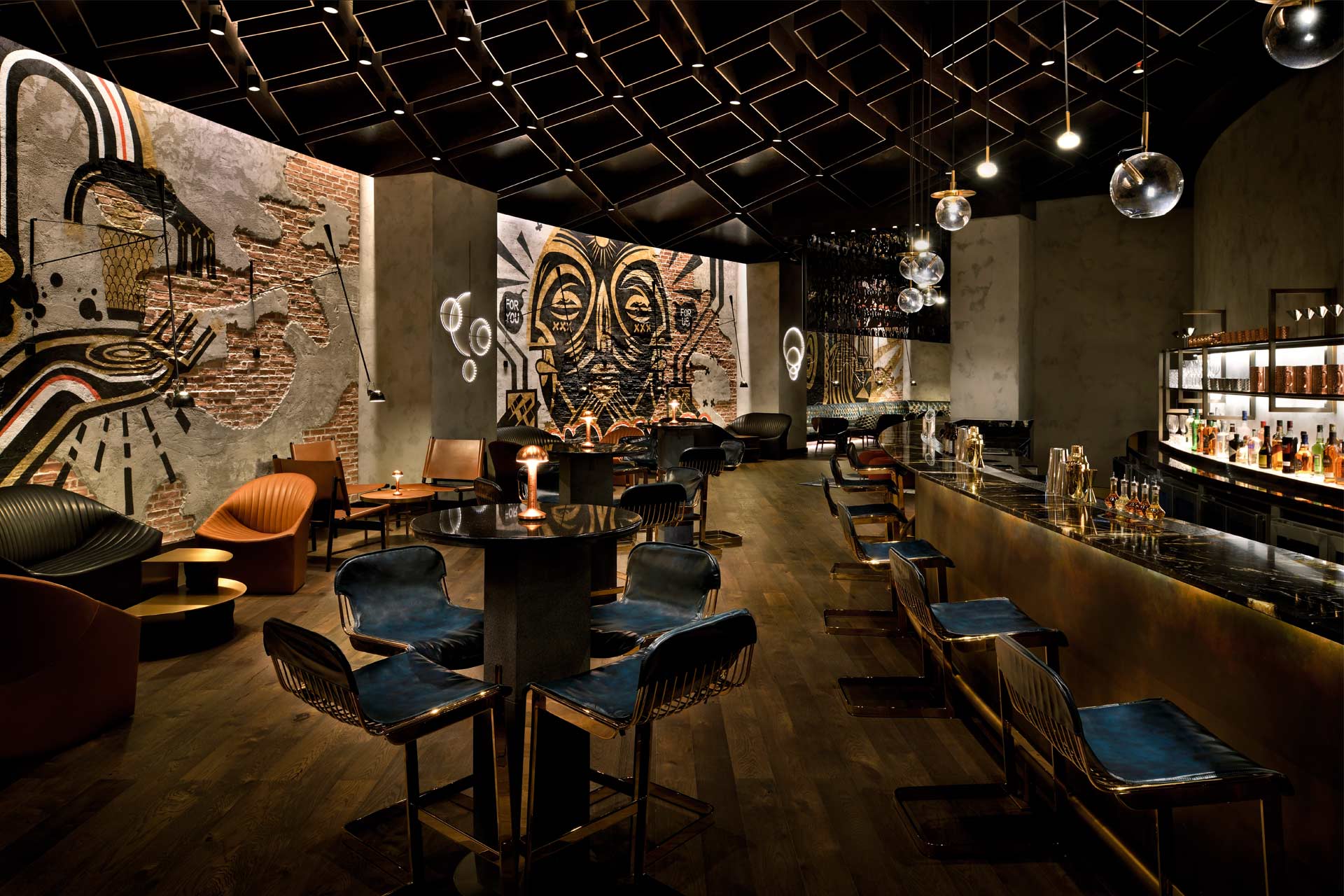