The opening of the glass-floored observation deck atop Büro Ole Scheeren‘s MahaNakhon skyscraper in Bangkok marks the completion of the second tallest building in Thailand.

The 77-storey MahaNakhon – a name that translates as “great metropolis” – is defined by a pixelated form with cuboid cutaways that spiral up its facades.

“The idea behind MahaNakhon was to take the life of the city and bring it up the tower in a dramatic, spiralling movement,” said Ole Scheeren, principal of Büro Ole Scheeren.

At a height of 314 metres, the skyscraper was the tallest building in Thailand when it topped out in 2015, although it has since lost the title to a residential tower that is one metre taller.

The building is topped with an observation deck that offers 360-degree views across the city.

“Even the very top of the tower is surrendered to the public, so there is not only a public square at the ground, but human activity rises along the pixellated shaft to the top floors of the building which are given back to the public domain,” said Scheeren

“It is a project that is strongly embedded in the city and the public realm, and expressively proclaims itself as an active part of it.”

The observation deck includes a glass deck that is cantilevered out from the building to give visitors views directly down to the ground more that 300 metres below.

Named the Skytray, the walkable glass platform measures 4.5 by 17.5 metres.

Inside, the tower contains a 150-room hotel and 200 serviced apartments, with several restaurants and luxury shops on the lower levels. 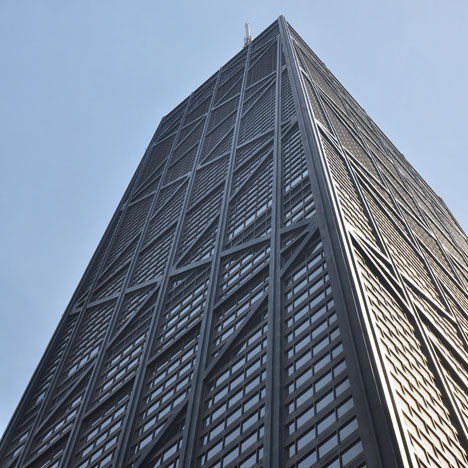 According to Scheeren, the building and its numerous cutaway balconies were designed to encourage a connection between the interiors and the city.

“The building is an exploration of bringing the inside and the outside closer together and to create living spaces that float high above the city,” said Scheeren.

“You can step out onto the terraces and transition to the open air, as people in the tropics live in a fluid condition between interior and exterior spaces. We are literally carving those possibilities into the tower and make these qualities accessible at staggering heights.”

Büro Ole Scheeren was commissioned to design the tower while Scheeren was working at Rem Koolhaas’ firm OMA. Since leaving the practice Scheeren has designed numerous towers around the world.

His studio has completed a pair of towers with honeycomb patterned facades in Singapore, and is designing a Jenga-like apartment in Frankfurt as well as a pair of skyscrapers in Vancouver.