Although not as renowned for its modernism as the Pacific Coast, the other side of the USA provided an equally important testing ground for the style during the mid-20th century.

From modest private houses to vast education campuses, important examples of modern architecture sprung up from New England to Florida during this period.

Clusters can be found New York’s Fire Island and university towns across the region, while other one-offs appear in unexpected places.

Lubell gathers the best of these in his new book, Mid-Century Modern Travel Guide: East Coast USA, published by Phaidon and following a similar compendium he created for the West Coast.

He then whittled down over 250 entries to just 10 of his highlights, which span a range of locations and typologies, for Dezeen.

See Lubell’s choices and descriptions of each project below: Perhaps no space better exemplifies Louis Kahn’s masterful exploitation of mass, scale, surface, and emotion than his Phillips Exeter Academy Library. Hiding behind a regimented brick façade is the building’s enormous, seventy-foot-tall atrium, lit by upper clerestories and encircled by book-filled balconies. These are framed by gigantic concrete walls, cut with massive circles, which Kahn called “concrete donuts,” shielding the library’s more than 250,000 books from daylight.

The intense shift between the unassuming exterior and breathtaking interior is indicative of Kahn’s ability to provide an unexpected visceral experience. Climb the corner stairs to the upper floors and be mesmerised by the changing atrium views and those of the historic campus. 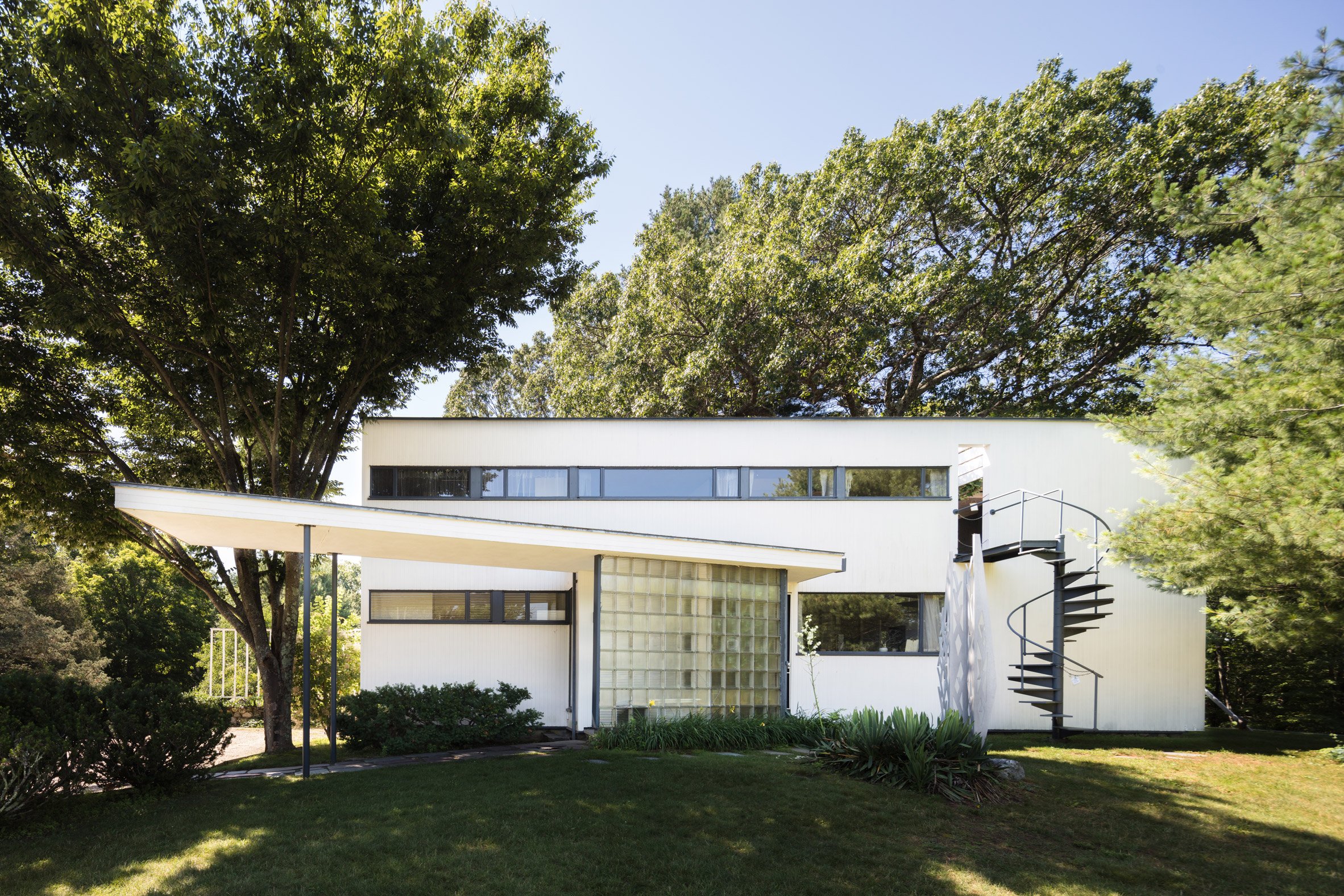 Gropius built this legendary home near Thoreau’s Walden Pond in 1938, after beginning his tenure as dean of the Harvard Graduate School of Design. From outside, the residence is simple and stylish, a white rectangle with thin ribbon windows and glass blocks, fronted by an off-centre portico. The composition combines traditional materials – wood, brick, and fieldstone – with innovative ones like metal, acoustical plaster, and chrome.

Inside, every detail, every structure, every view is carefully designed to maximise beauty, efficiency, and simplicity. Rooms – carefully oriented to the outdoors – flow from one to the next, encouraging flexible living and a perfect balance between serenity and excitement. 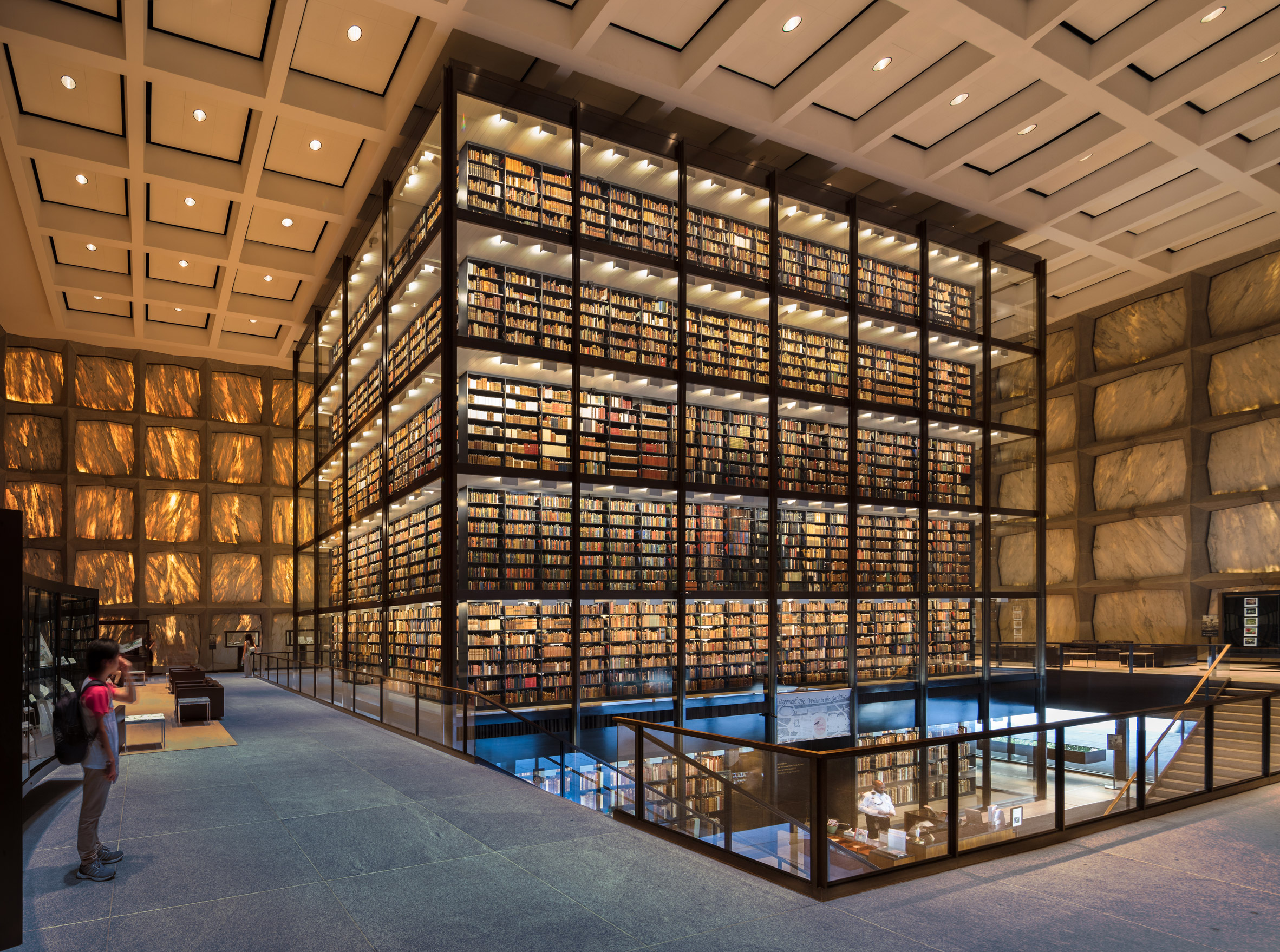 Of Yale’s staggering Modern treasures, the most surprising is this library, which resembles a giant mausoleum outside, but transfixes within. Its weighty facade of grey-veined marble squares, outlined by Vermont Woodbury granite, floats above a glass entry, thanks to a hidden system of steel trusses.

Upon passing through Beinecke’s revolving doors, the first thing you’ll notice is the six-storey glass- and-steel tower of books rising through the building’s centre. Magically lit, these gridded stacks are the stars of the show (when has that ever happened?). All is illuminated via the etched marble walls, which maintain a cool solidity or radiate glowing orange sunlight, depending on the conditions outside. Edward Durell Stone’s SUNY Albany campus is an epiphany for even the most ardent architecture zealot. Stone was commissioned in 1962 by New York governor Nelson A Rockefeller to build a tabula rasa complex for the school’s Uptown Campus on the once-rolling hills of the Albany Country Club. The “Academic Podium,” as Stone called it, is the architect’s modernist acropolis; a raised grid of white, classically inspired New Formalist academic and administrative buildings. 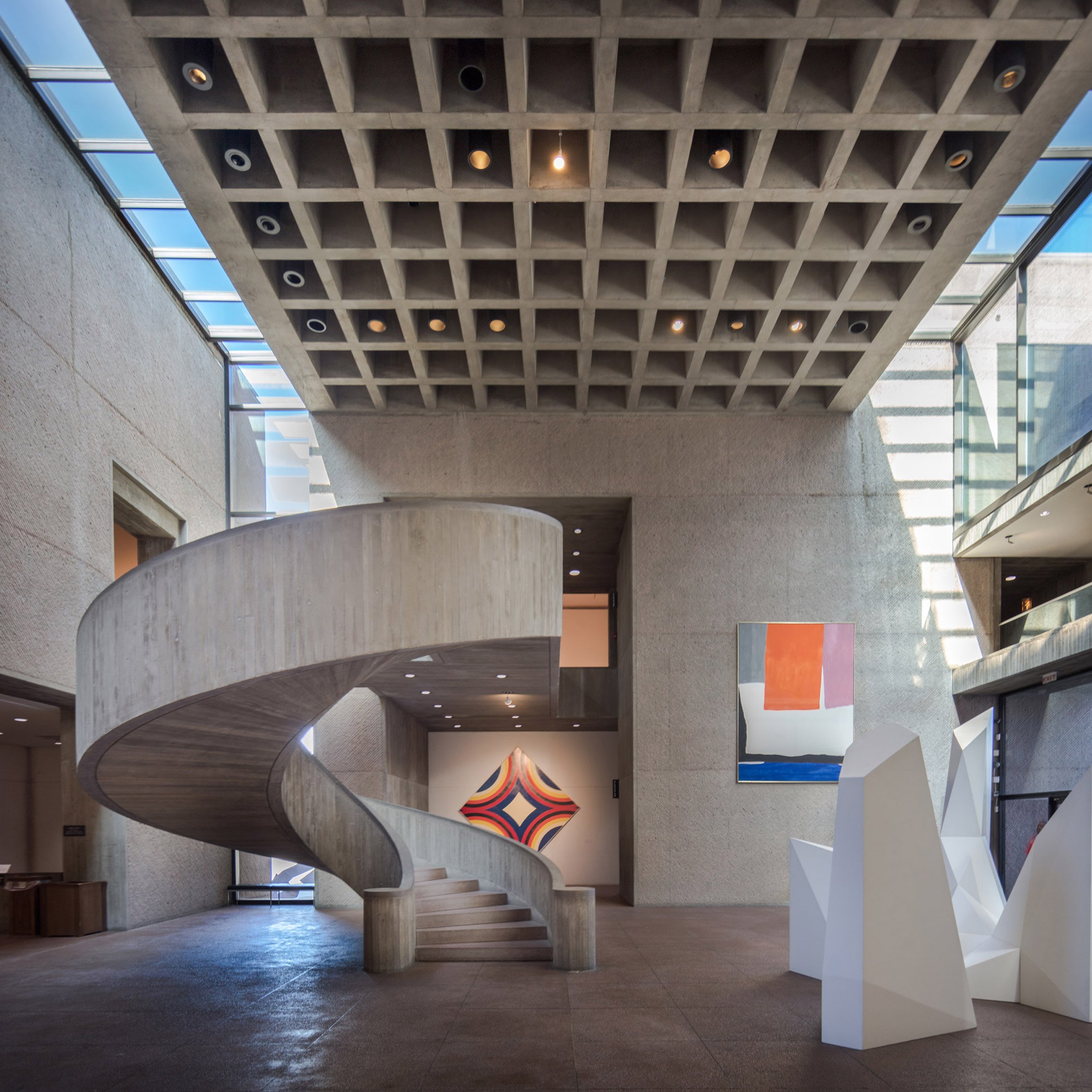 You’ve probably never heard of the Everson (pronounced Eeverson) Museum. But IM Pei’s first cultural building is a three-dimensional tour de force, and easily one of his best structures. The edifice consists of four cantilevered and chiseled concrete cubes, separated by voids and connected by bridges surrounding an open atrium.

The soaring atrium contains a colourful Morris Lewis painting, a floating concrete spiral stair, a gridded concrete ceiling, and peeks into the upstairs galleries, with glowing light emanating through the facade’s glazed cavities.

Make sure to visit the basement, with a model of the museum that reveals its intended role as the centrepiece of Victor Gruen’s “Near East Side” plan to remake the area as a cultural and civic hub. The vision, including a city hall by Paul Rudolph and office centre by Marcel Breuer, never came to be. 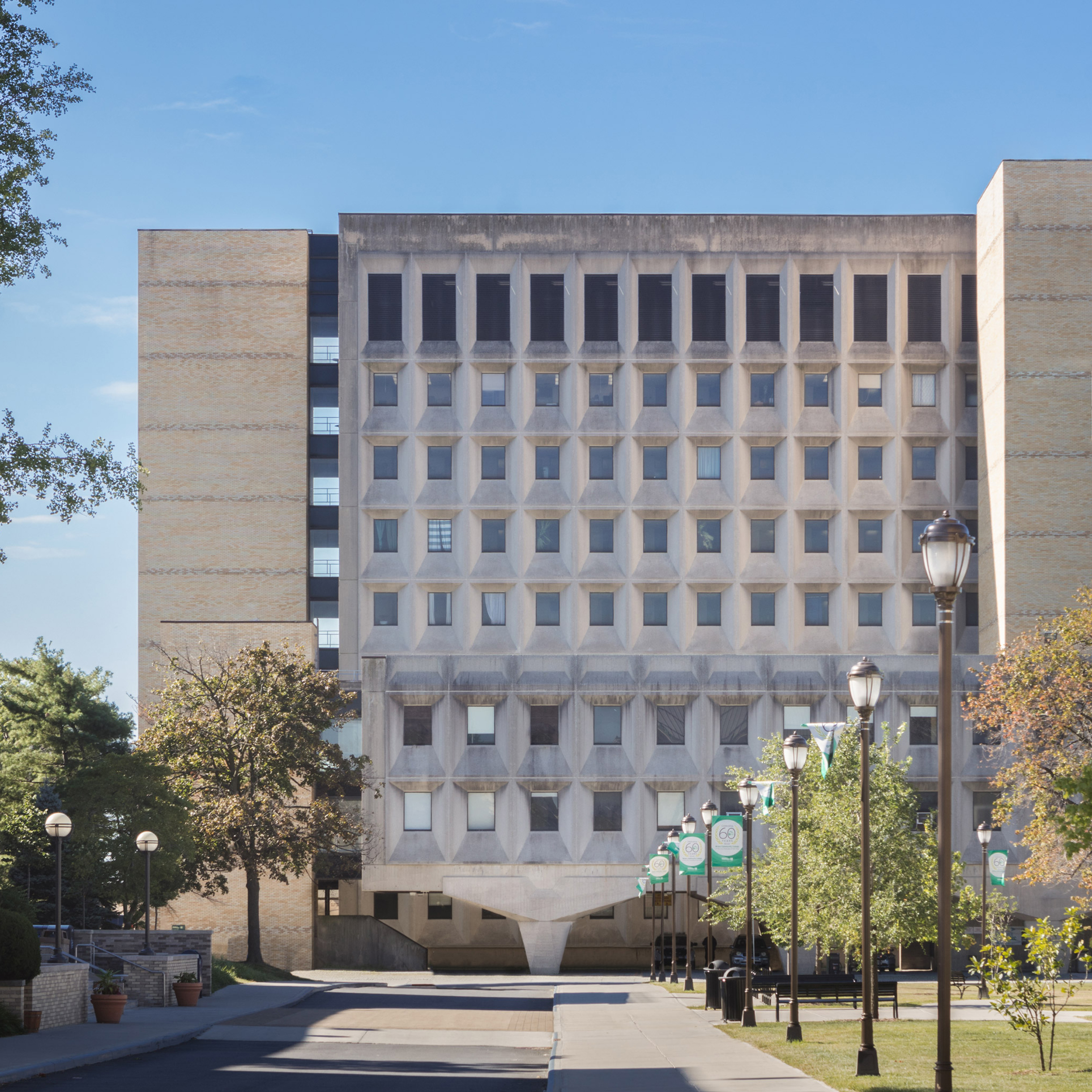 One of New York;s greatest architectural surprises is Bronx Community College (BCC), located above the bluffs of University Heights. The campus was created in 1894 as New York University’s “Uptown” campus, filled with Beaux-Arts structures and traditional landscapes. In the late 1950s the university tapped Breuer to design five new brutalist structures that set themselves apart in every conceivable way from the school’s classical beginnings.

They include the trapezoidal-shaped Begrisch Hall, cut with angular channels and lifted on sturdy triangular legs; Colston Hall, a boomerang-shaped Bauhaus residence with fantastic flying bridges; and Meister Hall, floating on Y-shaped columns with a deeply sculpted concrete facade. In 1973 NYU, under threat of bankruptcy, sold the campus to the state, and it reopened shortly after as BCC. 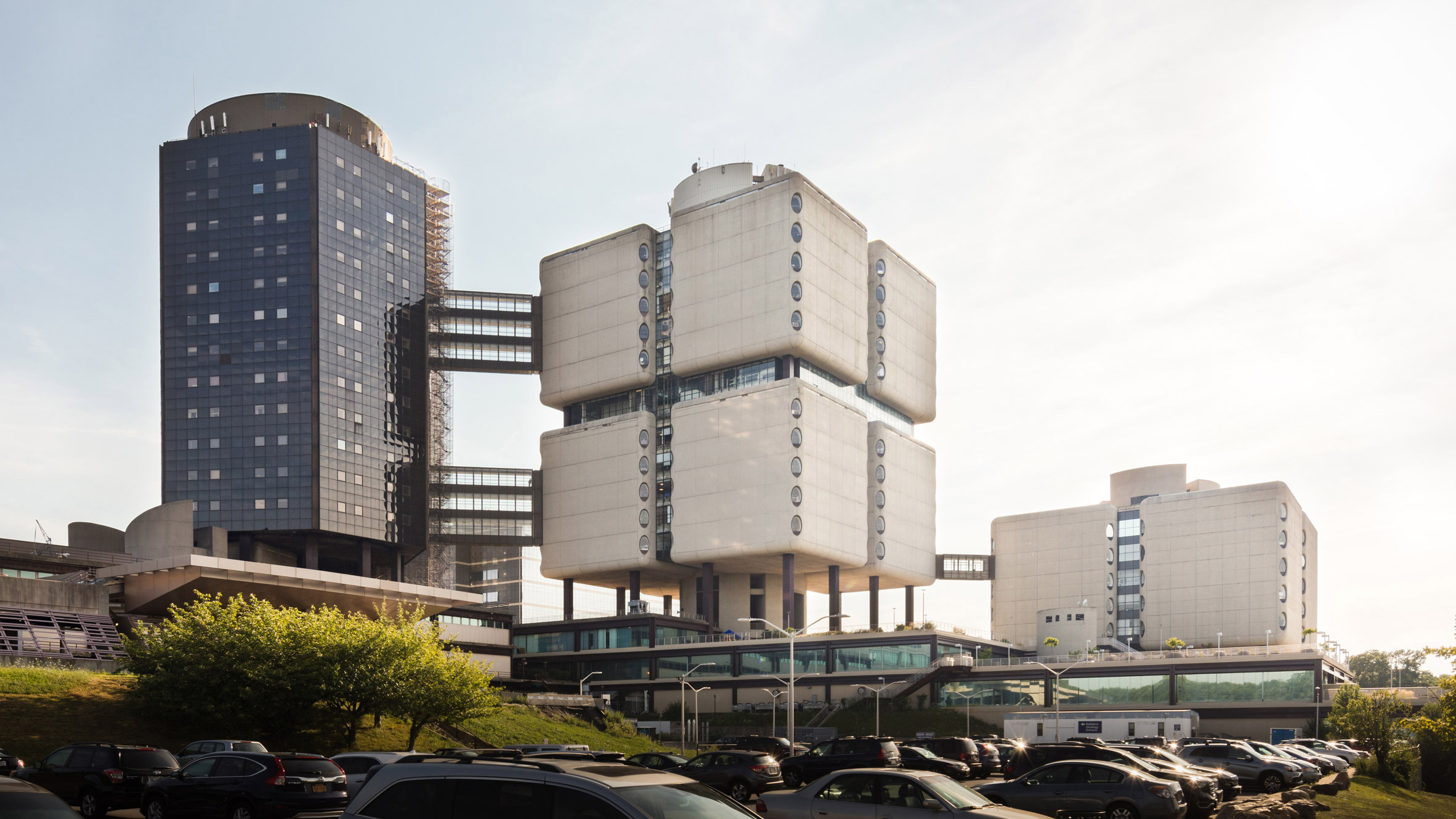 Be prepared to enter another world when you visit Bertrand Goldberg’s Health Science Center, now Stony Brook University Hospital. Goldberg designed his conglomeration of futuristic buildings to radically alter how health care was practiced. He created a “village of space,” consisting of three towers floating on stilts above a seven-story base building imbedded into the hill.

The structures themselves, which step down in height, divide further into five-story modules, or “cubicles,” each containing an enclosed atrium at its centre. You move between them vertically via elevators and horizontally via glazed aerial bridges. Visitors enter the complex through an unfortunate new addition, but quickly make their way into Goldberg’s zone, whose scale and sense of science fiction are hard to fathom. 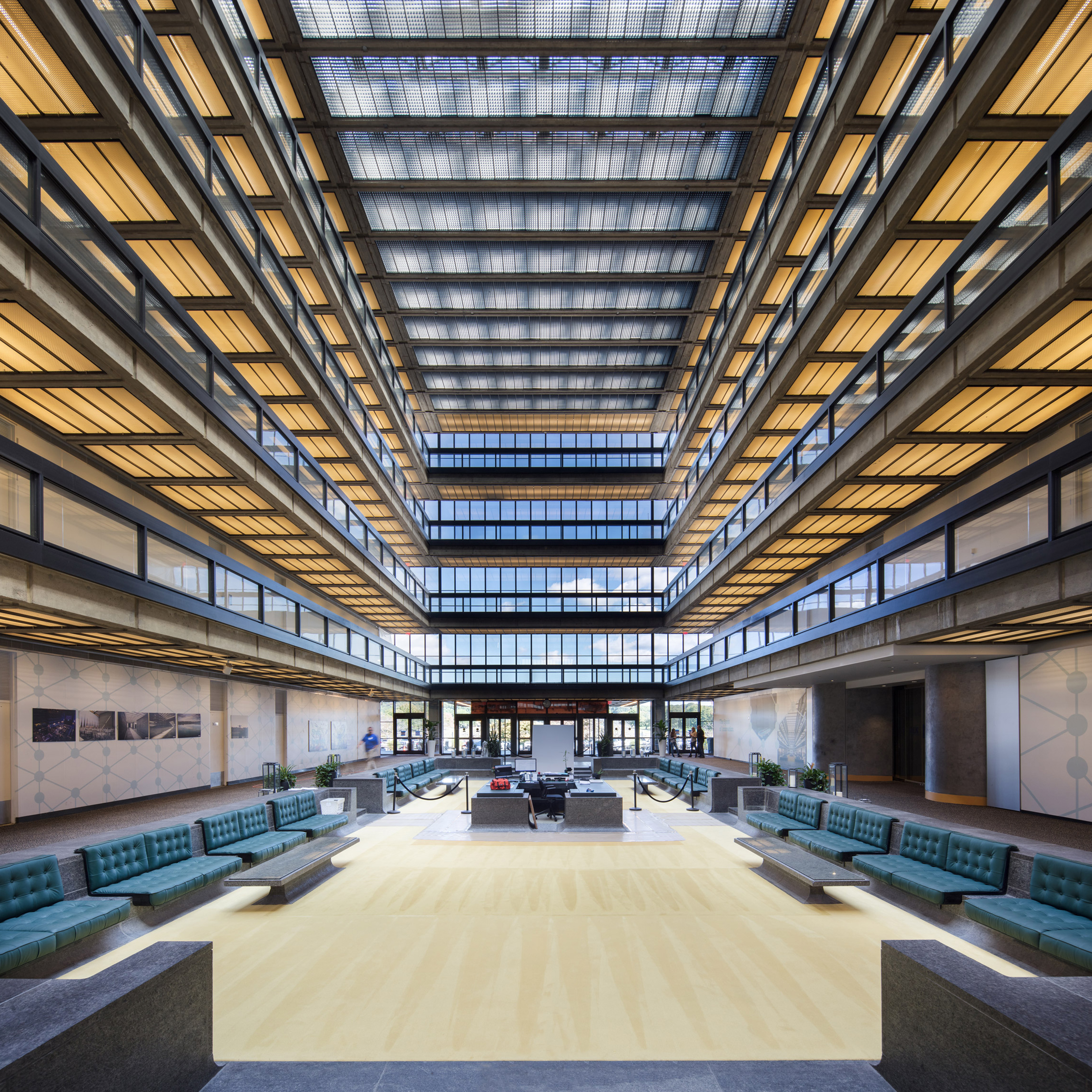 Once home to offices and labs for the once-mighty technology and communications giant Bell Systems, Bell Labs is one of the most remarkable workplaces you’ll ever visit. The once-derelict structure was recently transformed into Bell Works, a facility for tech start-ups. The cluster of four connected structures, clad in mirrored glass, is edged with meandering ponds, cherry trees, and plantings. Its glazing reflects the landscape and sky, virtually making the huge edifice disappear.

Inside, the complex is connected by a dazzling, cruciform-shaped atrium, stretching hundreds of feet, interrupted only by concrete cores, onto which the skilled renovation team, led by Alexander Gorlin, has installed colourful abstract murals. 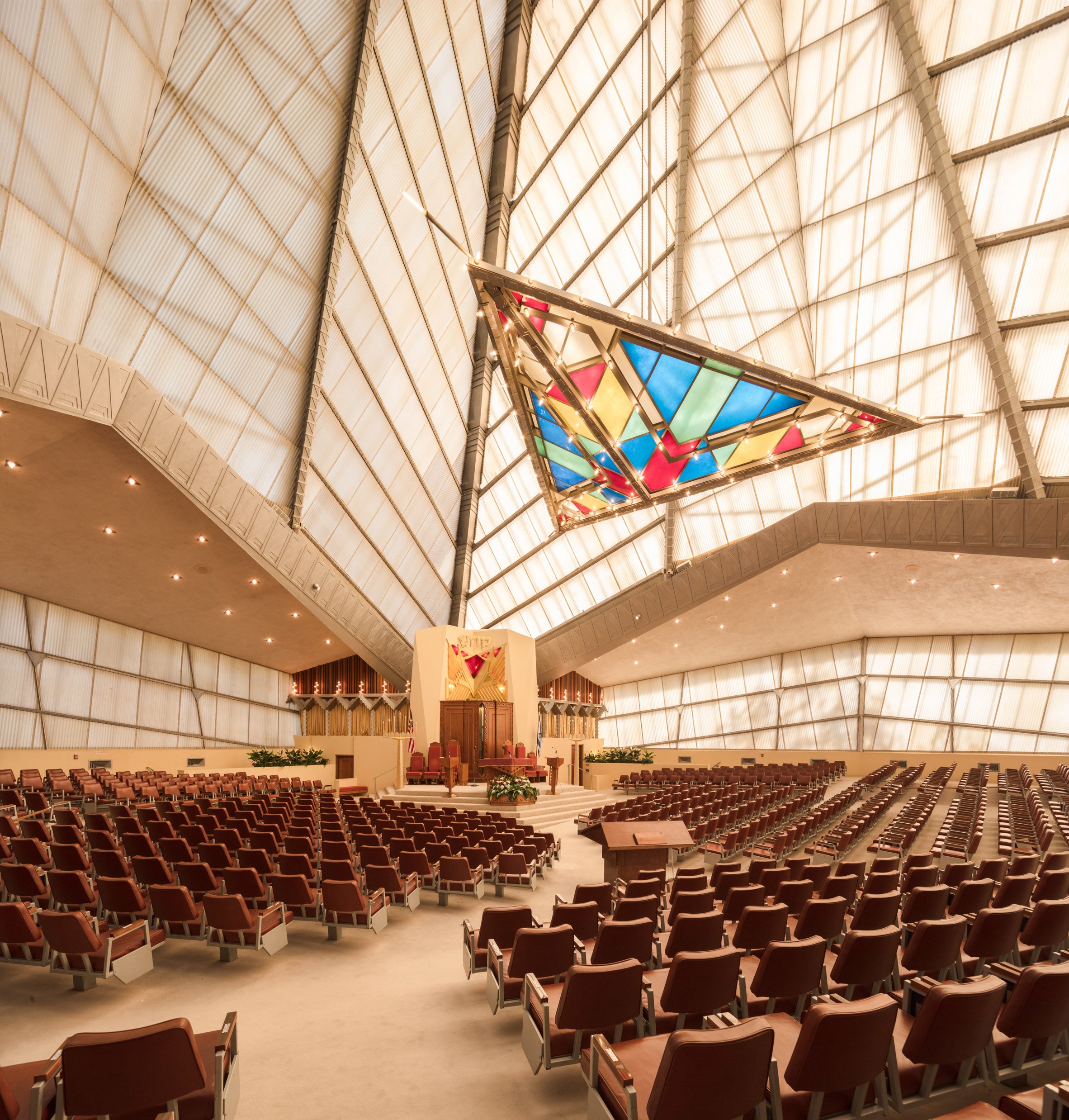 It’s a mystery why Frank Lloyd Wright’s Beth Sholom Congregation – a transporting structure in Philadelphia’s northern suburbs – is not more famous. The building was conceived by Wright and Rabbi Mortimer Cohen, who created a stunningly original design that Wright proclaimed would fuse Jewish and American values.

From outside, the solid, pyramidal building resembles a Mayan monolith or mountain – it’s said Wright wanted to evoke Mount Sinai – with a 100-foot-tall roof supported by massive steel beams and opaque walls (except at night, when they glimmer). Its hexagonal plan is meant conjure cupped hands, as if the congregants were “resting in the very hands of God”, as Wright put it.

Inside, the soaring sanctuary glows majestically, its angled, kaleidoscopic glazed walls and diamond-shaped seating plan facing a forty-foot-tall concrete monolith (representing the stone tablets given to Moses) containing a wooden ark and a dazzlingly colourful, triangular stained-glass “light basket” hanging from the ceiling. Nothing is slight about Pier Luigi Nervi’s Scope Arena, which dominates a raised paved plaza in downtown Norfolk, Virginia. The arena is topped with the world’s largest reinforced thin-shell concrete dome, floating over a circular glass base. Like most Nervi projects, its elaborate structural system also forms its aesthetic highlight.

Outside, the dome is supported by twenty-four elephant-sized, V-shaped concrete buttresses. Inside, interior ribs form a hypnotic web of diamond-shaped concrete panels. The eleven-thousand-seat arena now hosts hockey, basketball, conventions, concerts, circuses, and more. Its name, by the way, is not an advertisement for mouthwash. It’s a shortening of the word kaleidoscope, meant to represent the many activities going on inside. 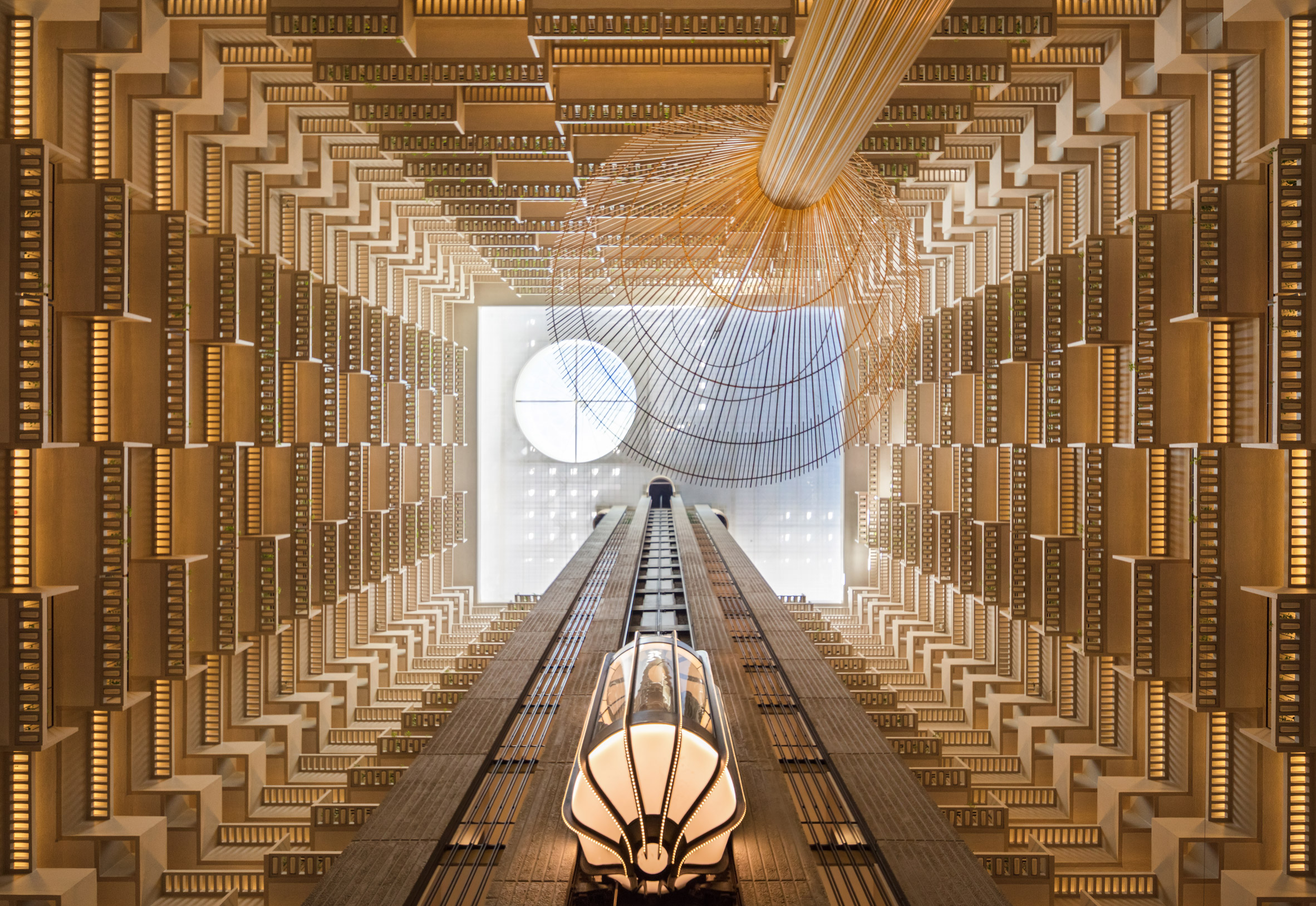 Probably the most seminal building in late architect John Portman’s exceptional career is the Hyatt Regency, a 22-storey hotel in his hometown, Atlanta. Part of a massive Portman-designed downtown redevelopment called Peachtree Center, this was the first of his hotels to ram a massive floor-to-ceiling atrium into its heart, creating a soaring, city-like indoor experience that spawned legions of imitators.

That futuristic space (almost certainly a model for the Death Star’s cavernous centre in Star Wars), ringed with cantilevered concrete balconies, topped by a multidimensional translucent skylight, and pierced by spaceship-like glass elevators gliding along a gargantuan concrete column, remains one of the most breathtaking sites in modernist architecture.

Portman intentionally designed its entrance to be confining, highlighting the contrast with the shockingly tall space, which prompted what writers began calling the “oh my God” effect. Your view upward is augmented by Richard Lippold’s cone-shaped sculpture Flora Raris. Head up the unnervingly fast elevators to see it from all angles.

Photography is by Darren Bradley.

Copyright © The Design Spy All Rights Are Reserved.

We try our best to attribute images, videos, and quotes to their creators and original sources. If you see something on The Design Spy that is misattributed or you would like removed, please contact us. The Design Spy participates in affiliate marketing programs and may earn a commission on sales through links to Bookshop, Society6, and various book publishers. See our Terms of Service and Privacy Policy.