A tattoo is a form of art that is made permanently on human body. As old body art, tattooing has been widely practiced worldwide in various cultures. For Polynesians, tattooing could be important rite of passage or symbol of social standing. In ancient China, piecing a mark on the body was a way to distinguish soldiers from civilians. Nevertheless, modern tattoos have evolved to embrace more artistic expressions. Not only the symbolic meanings, but also the placement and tattoo styles are among the considerations when getting a tattoo.

What is tattoo style

A tattoo style is the way how the tattoo artist portray and render the ink art. It suggests the manner of grouping similar tattoos into certain categories. For example, tribal tattoos and traditional Japanese tattoos undoubtedly fall into distinctive categories. As a form of visual art, tattoo is a a very powerful language to make a statement or convey meanings. It also employs the styles of other art forms for its artistic presentation. So that’s why we see replica of conventional art styles in the body art. 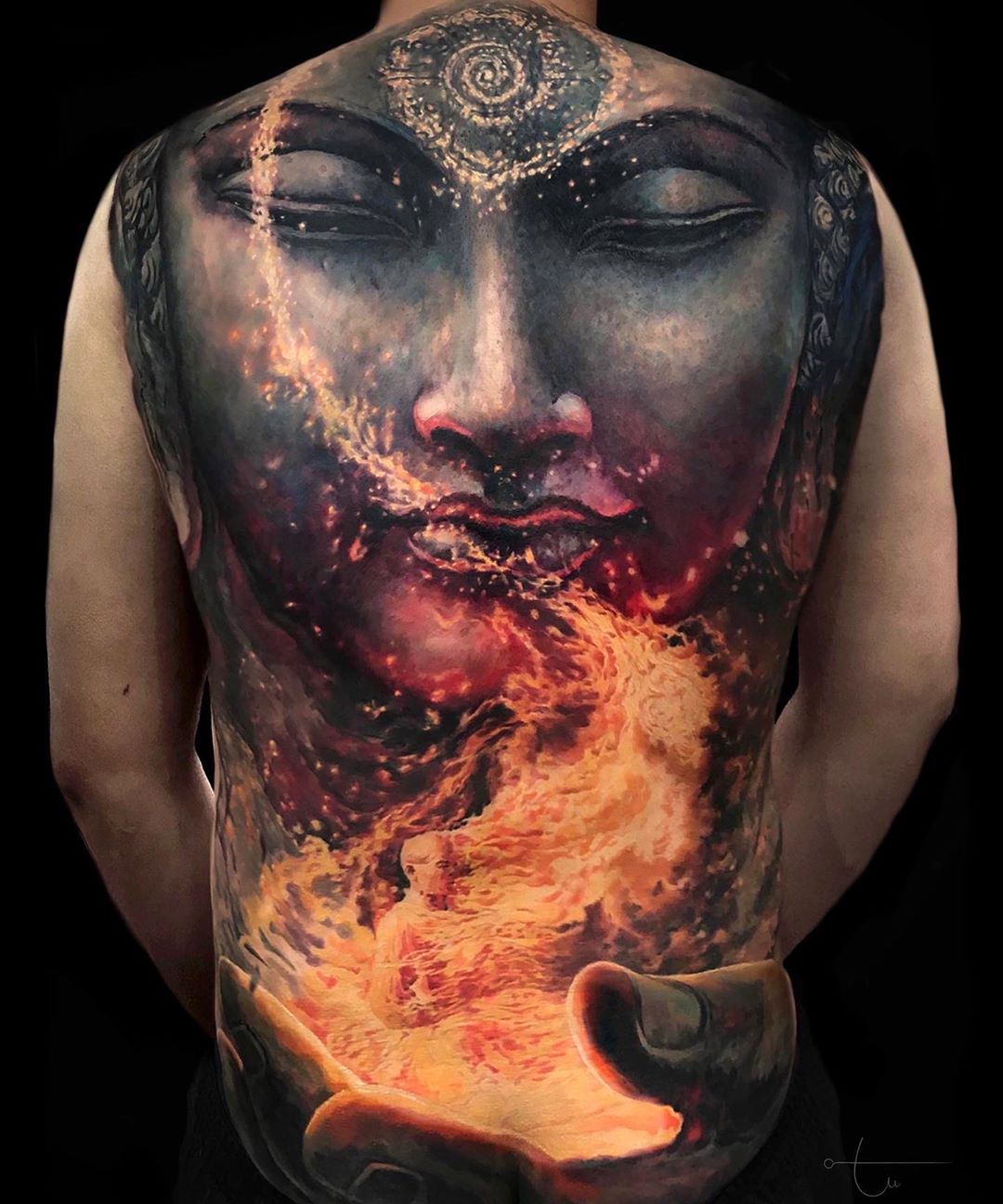 Source
The factors to determine the tattoo style can be conscious choice of the artist and clients or the medium or method that the artist uses. For example, watercolor and dotwork are examples of techniques that result in the unique styles. Of course, the style is also relevant to the skills, discipline and perception of the artist. In fact, the artist develops his own style over time either consciously or unconsciously.

In the 20th century, art experienced various art movements that were accompanied with specific styles and philosophy. With the timeline moving forward, the ink work still see the influence of their styles, such as abstract, surrealism. It’s always inspiring to read and appreciate the great artwork such as painting, drawing, photography, or other designs.

How do I choose my tattoo style

When you are new to get a tattoo, which kind of the tattoo style my tattoo will look like is certainly one of the important considerations. Instead of rushing into a decision in the tattoo shop, a good homework is always necessary. Here are some of the tips you may be aware when it comes to select a style.

So what are the different ink styles all about? We’ve gathered examples of the most popular tattoo styles. Whether you’re looking for inspiration, or you are confused with some of the concept, you may find this page helpful. 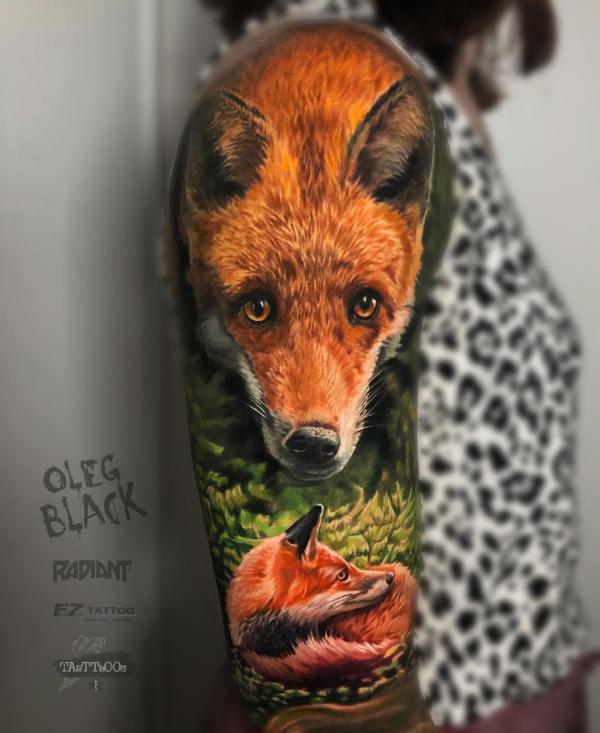 3D art is the term used for computer art, which means the work is produced by special software through precise calculation. In the art of tattooing, 3D tattoo refers to tattoos with photo-realistic style. However, the style is still 2-dimensional but gives optical illusion of 3-dimensional.
Source 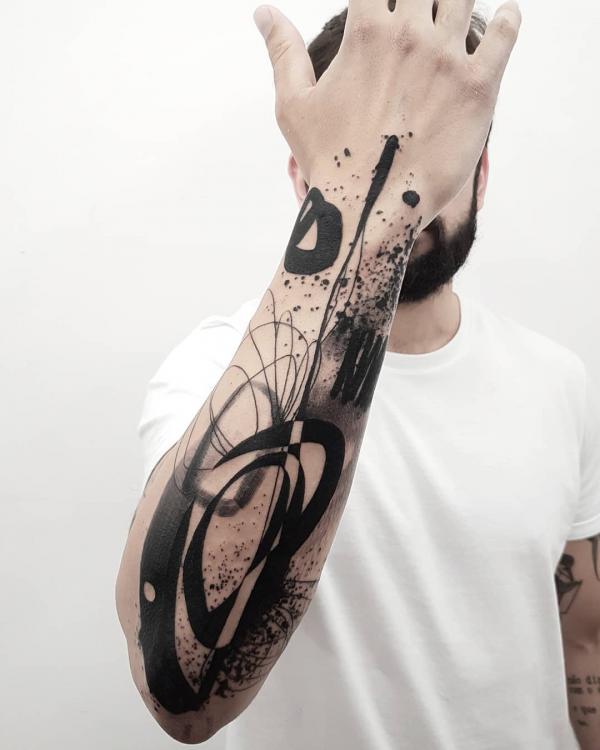 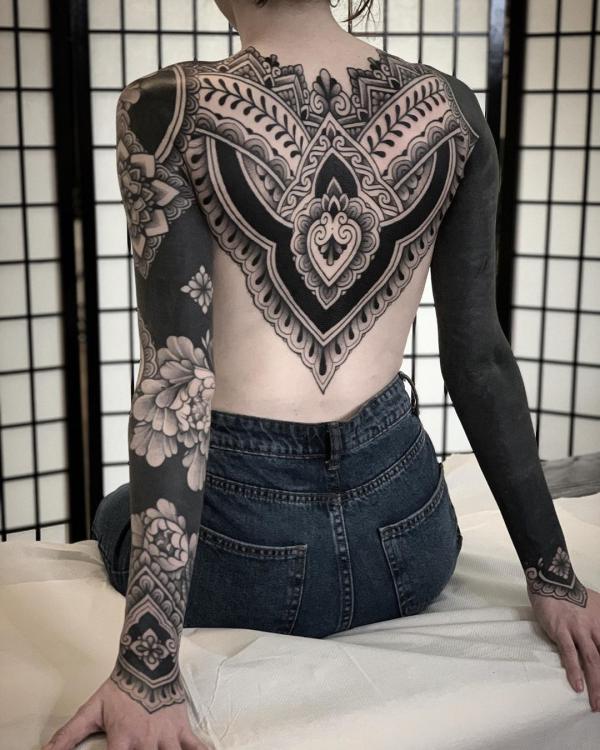 A blackwork tattoo refers to the stye of body art with bold black block of geometric shapes and lines. This style was originally seen in tribal tattoos which features Polynesian patterns. But it now incorporates elements from other art forms, such as abstract art, illustrative and graphic art, and even calligraphic scripts.
Source 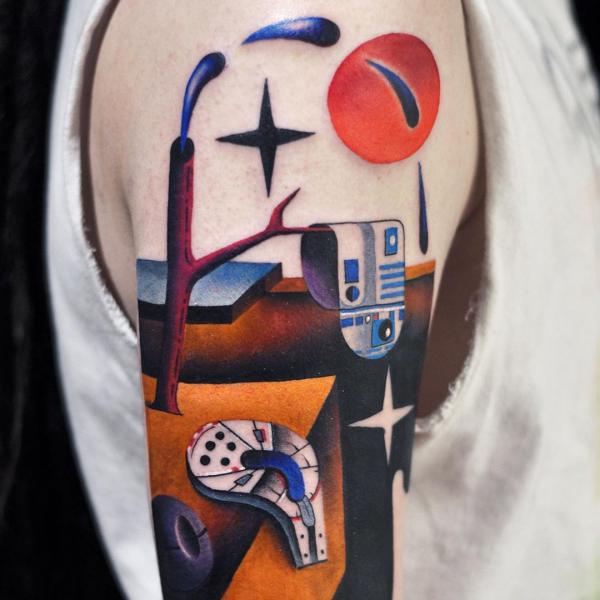 Cubism is the art movement created by Pablo Picasso and Georges Braque in the early of 20th century. The art style depicts geometric objects or figurative characters in the way of stylization and distortion, which inspires observations from different view.
Source 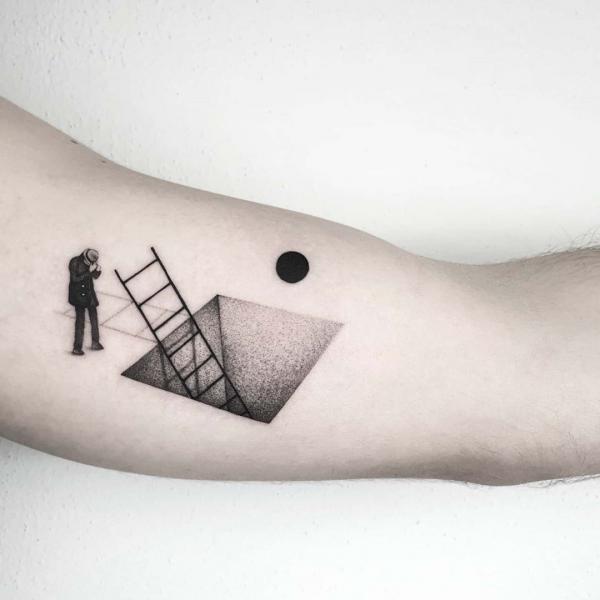 A Dotwork is the style of tattoo with images composed entirely of single dots. It is worth of mention that the technique creating stippling effect is also Dotwork, which uses black or grey ink, rotary machine and stitched needles. The dotwork is the modern representation of hand poking technique which does not use electric machine.
Source 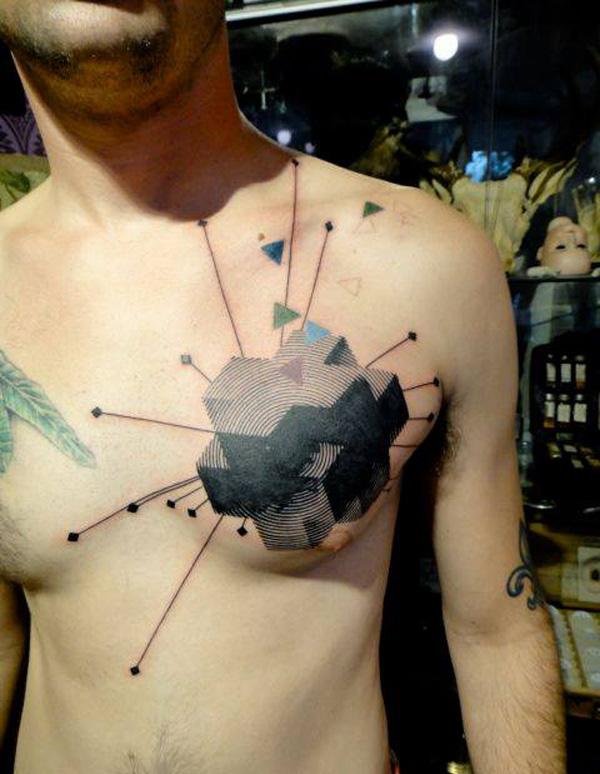 Geometric tattoos feature the math of shapes such as line, square, and circle. Sometimes, the composition is non-objective, creating abstract effect, for instance, line work. Sometimes, it forms exquisite patterns such as Mandala. 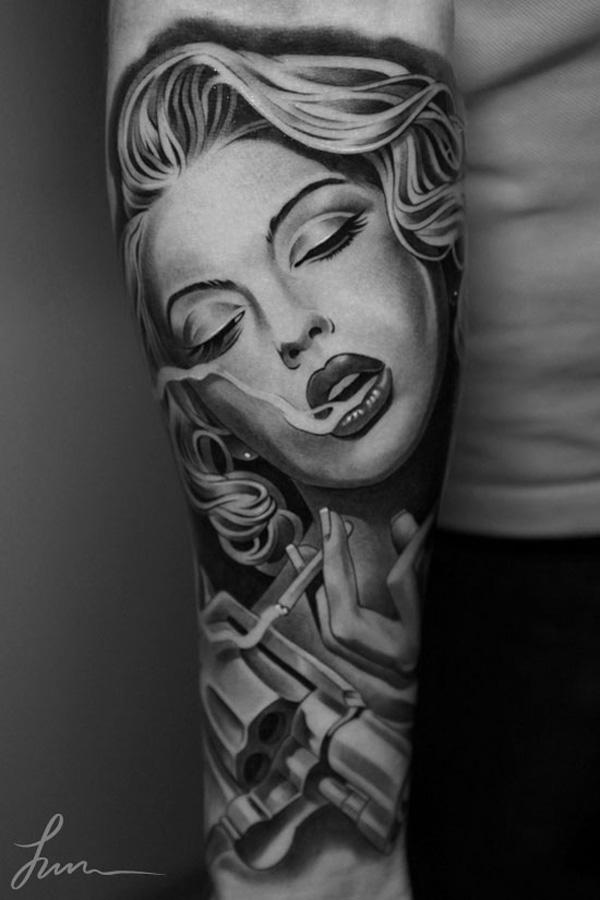 Grayscale means black and white, which refers to the category using the ink of black and gray colors, in illustrative or realistic style. The style becomes popular as the dark colors tend to be more durable compared with colorful ones. 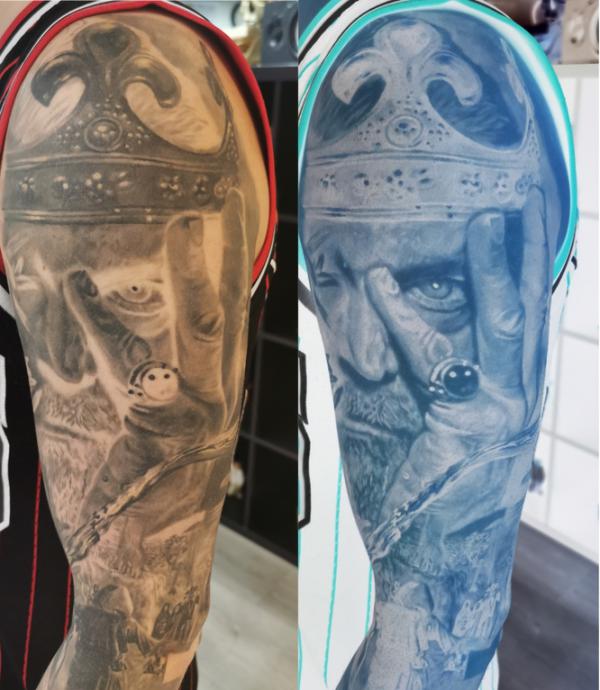 Inverted tattoo is also known as negative space tattoo. The negative is exactly how the image stores on film when you take a picture through a camera. When film is exposed to light, the areas that are supposed be light actually appear dark and dark areas appear light. Inverted tattoos mimick the effect of negative by reversing its colors into their respective complementary colors. Of course, you don’t have to calculate the opposite colors. In Photoshop, you can invert colors for any layers easily. 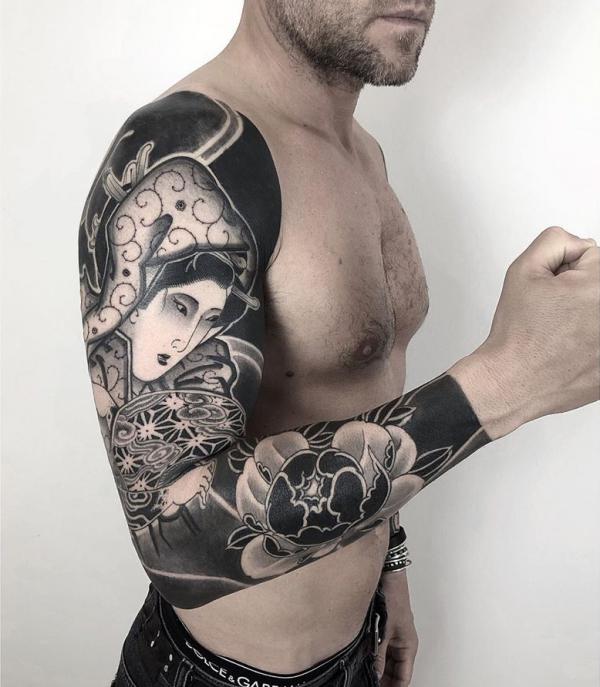 Traditional Japanese tattoo finds its popularity in the designs of modern body art. Tattoos of this style usually feature elements which are rich in Japanese culture, such as dragon, kio fish, wave, cloud and chrysanthemum.
Source 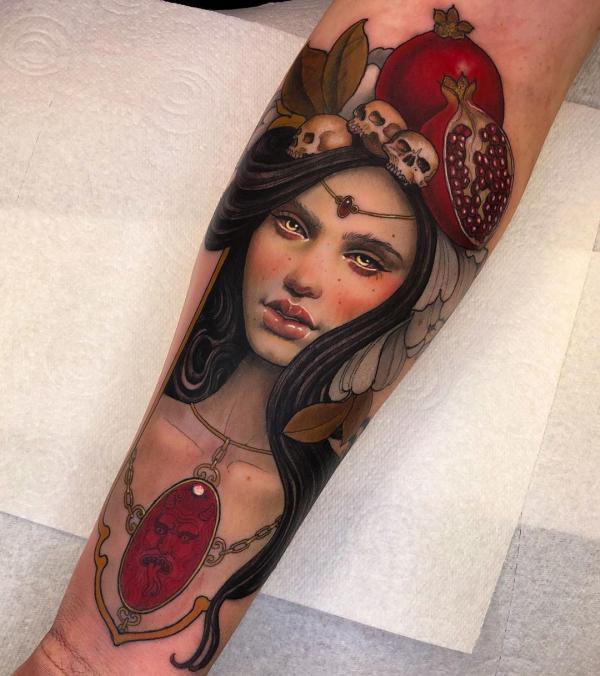 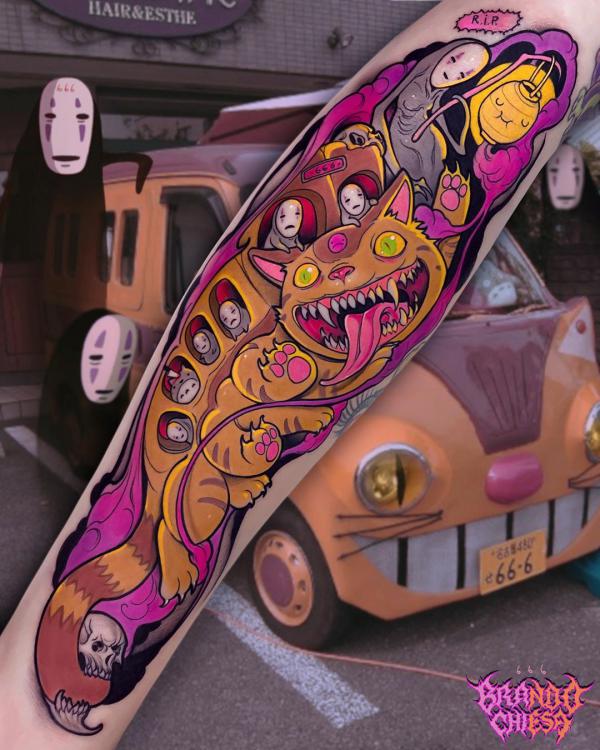 New school is a tattoo style originating on the West coast in the late 1970s and early 1980s when artists experimented to incorporate vivid colors and exaggerated imagery in tattoo design. Heavily influenced by cartoons, comic books and anime, New school reflects transition towards popular culture at that age. In contrast to old school style, new school also utilizes bold outlines but a wide range of colors.
Source 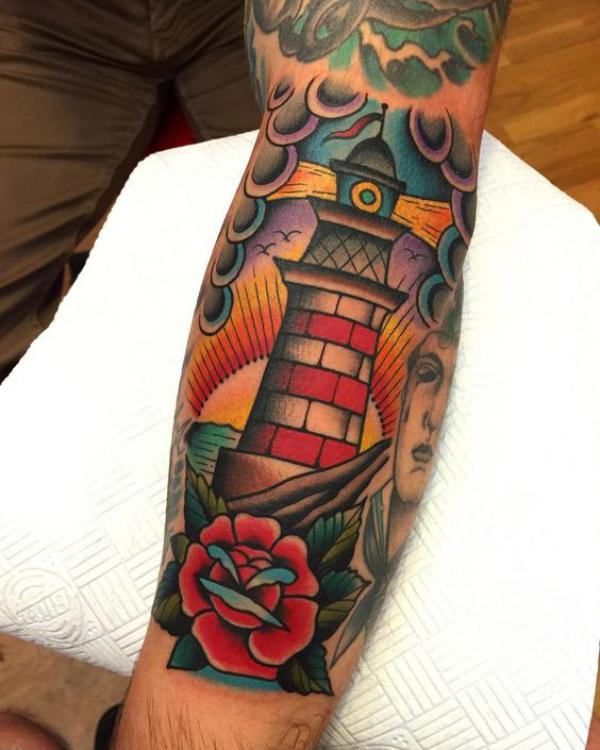 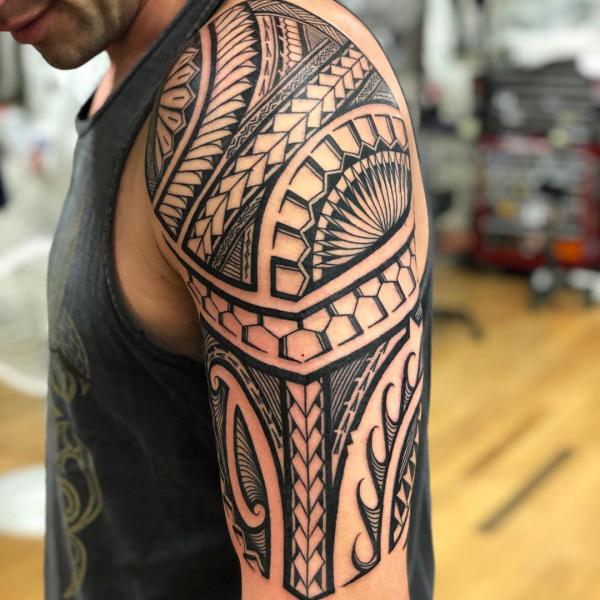 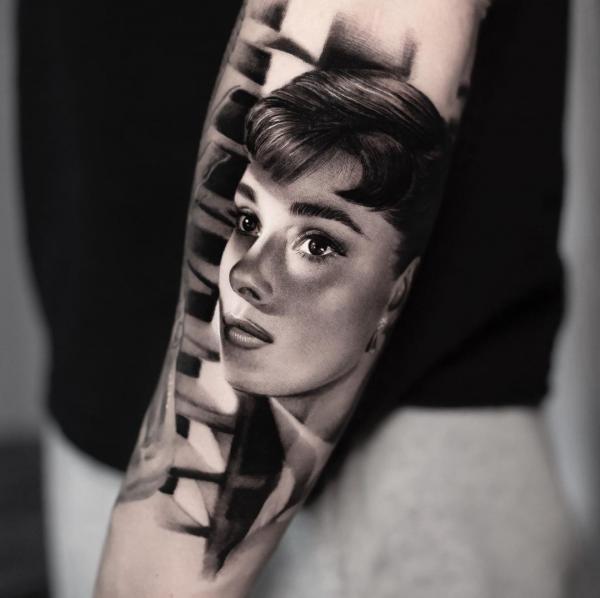 Realism is used to describe the tattoo that is created in a realistic or photographic manner. In contrast to surrealism or abstract, it is the precise and detailed depiction of visual appearances without stylization. It normally takes longer time for the artist to work on the subtle details.
Source 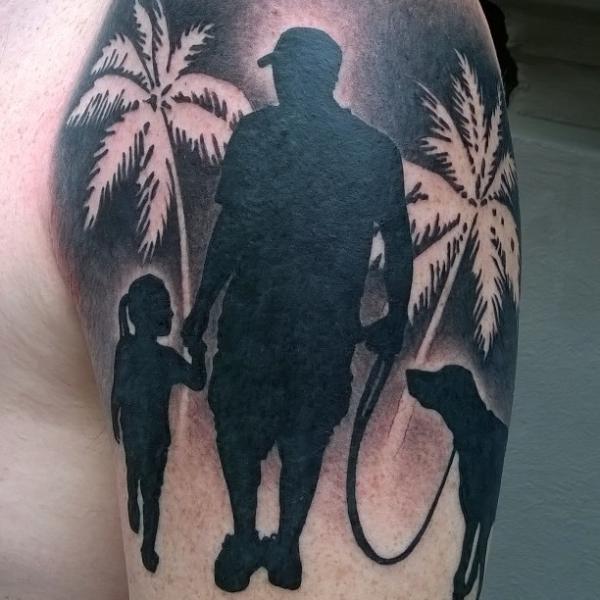 Silhouette refers to the style in which the motifs, such as animals, humans and symbols, are depicted as solid shape, usually in black color. On the contrary, the outline depicts the edge of an object in a linear form.
Source 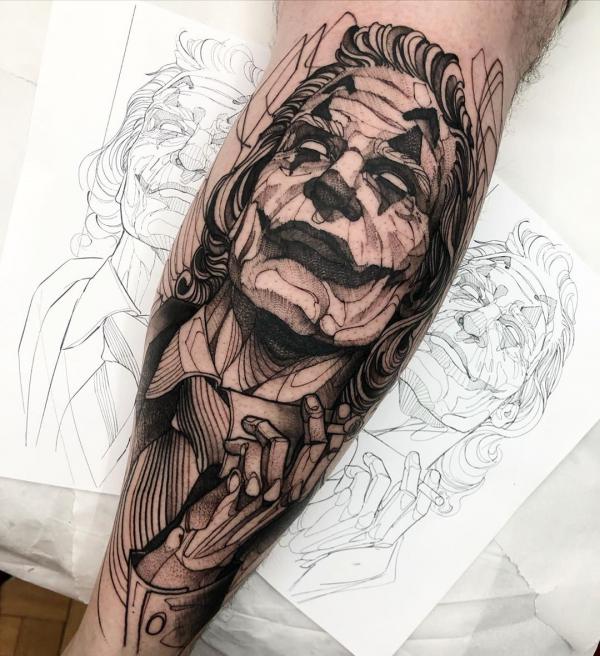 Sketch is the style in which the tattoo is rendered like freehand pencil drawing but not in realistic way. In visual art, the sketch is a quick method for artist to record or work out ideas. Sketch tattoos are usually in black and white with sophisticated line work.
Source 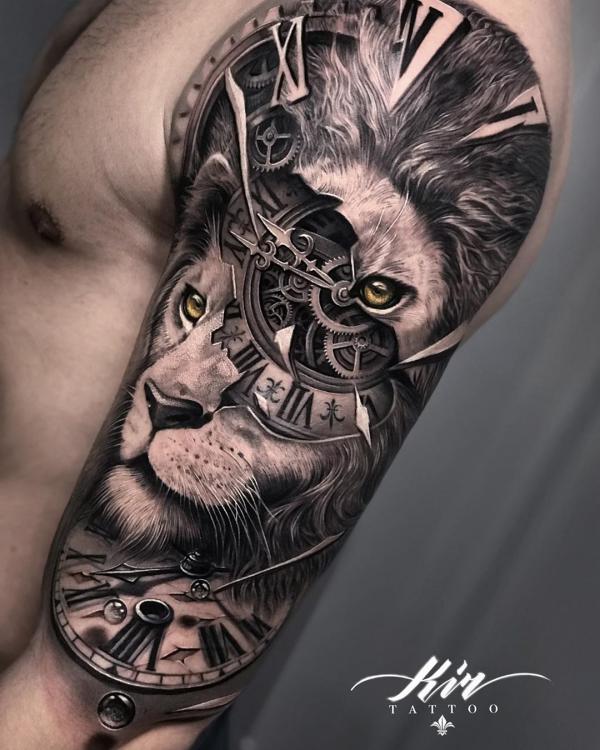 Steampunk is a style of tattoos that incorporates aesthetic imagery of mechanics such as clock, gears and robots, etc. People get steampunk tattoo to pay homage to the history of the 19th century British Victorian era. In some designs, the tattoos are depicted as if the bones and joints become mechanical parts. So the steampunk tattoo also has an alias biomechanical tattoo.
Source 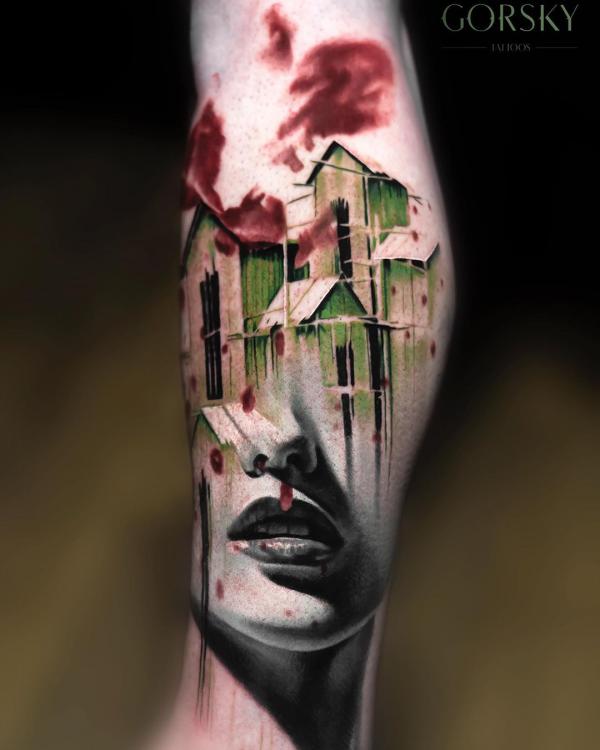 Surrealism is the artistic style that pursue release of one’s imagination of the unconscious mind. There are a lot of famous surrealist paintings out there. Surrealism tattoos are highly influenced by their styles.
Source 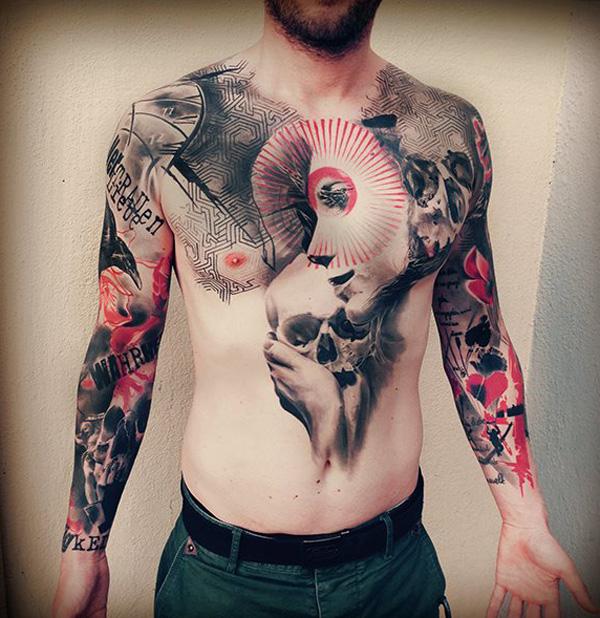 Trash polka is a tattoo style that was initially practiced by German artist Volker Merschky and Simone Pfaff in 1998. The style is the combination of realism and surrealism. By using chaotic elements such as brush strokes, splatteres, it transmits mixed feelings and stories. 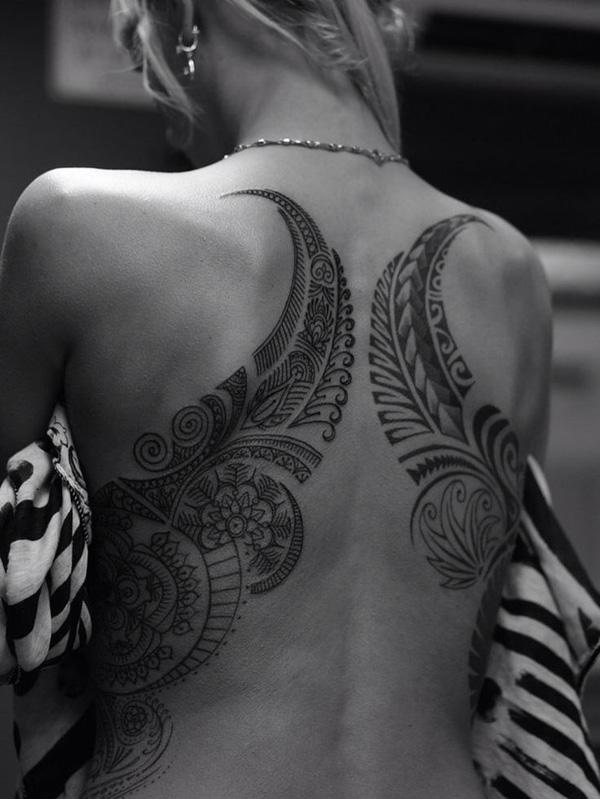 Tribal tattoo is the style of Polynesian tattoos and their modern variations. Polynesian tattoos played important role in the tattoo history. The origin of the English word ‘tattoo’ actually came from the Tahitian word ‘tatau’. With the spreading of the indigenous body art, the wild and exotic style attracts the interest of more and more people. 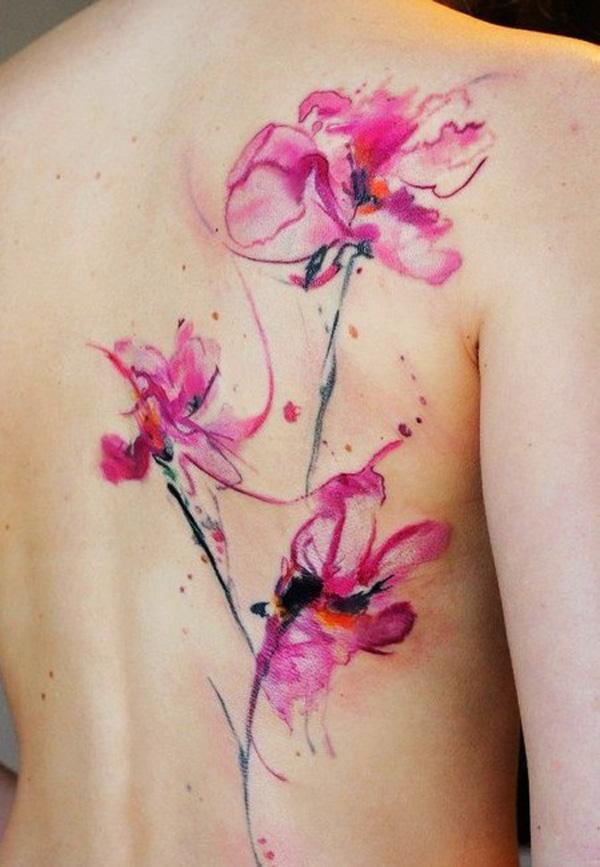 Watercolor tattoo emulates the art of watercolor paintings. In contrast to conventional tattoos, it’s not dependent on black outlines. By using special techniques, the artist creates the style that draws attention to the artistic appear of floating colors.

Via:  Art and Design.

55 tattoos that represent the love, togetherness and forever.

Bird tattoo is getting popular for the large avian spectrum on earth. And ...

55 tattoos that represent the love, togetherness and forever.

As one of quotes says, “The love of the Family is life’s greatest ...

most amazing artwork of Vincent Van Gogh as tattoos

Who’s not aware of the Vincent Van Gogh’s artwork? All the vibrant, moving ...

Exploring and Expressing the Pain and Ecstasy of Life through Art.

Faces of The Future: A Brand New Exhibition by Hanumantra

The Abstract Tattoos Of Artem Koro

Kimika Restaurant in New York City by Bespoke Only