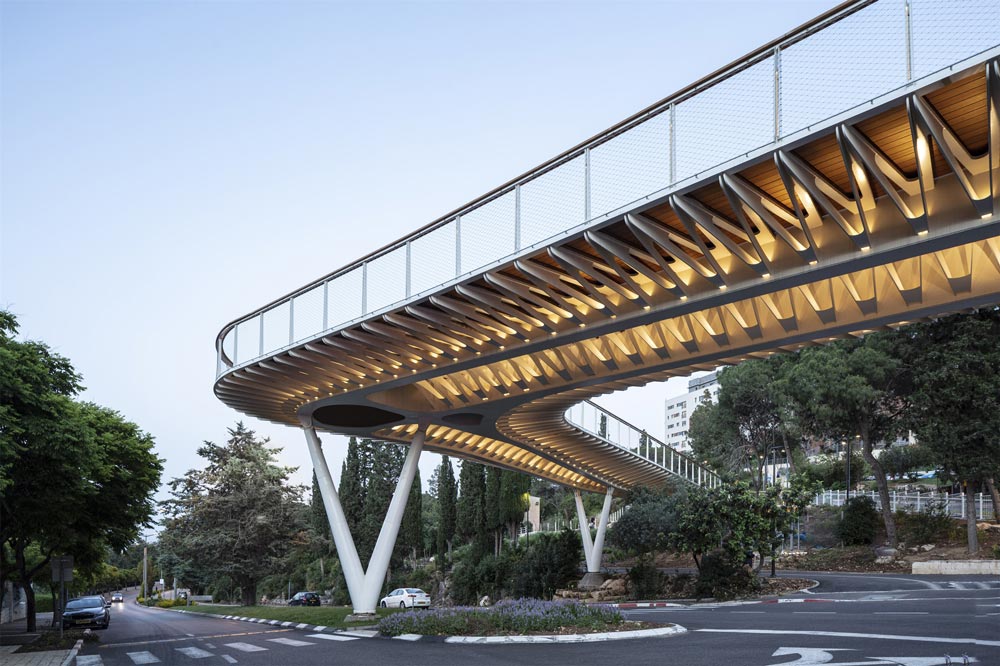 Weaving a bridge across two potential promenades, Schwartz Besnosoff Architects in collaboration with Rolka Studio have showcased a stunning walkway flushed along with an entrance gate to the Technion I.I.T (Israel Institute Of Technology) in Haifa, Israel. The vision of the gate widens the Technion’s values of excellence and innovation. The angular forms encase a safe and controlled affair, coupling two existing disconnected paths. At one end it touches down into the city and the second part lift-off near the entry gate inside the campus that leads to its historic centre. The design infers an interpreted interaction of the passage where a gate is not seen as a barrier but as a fabric that knits the city and the campus through a green promenade. 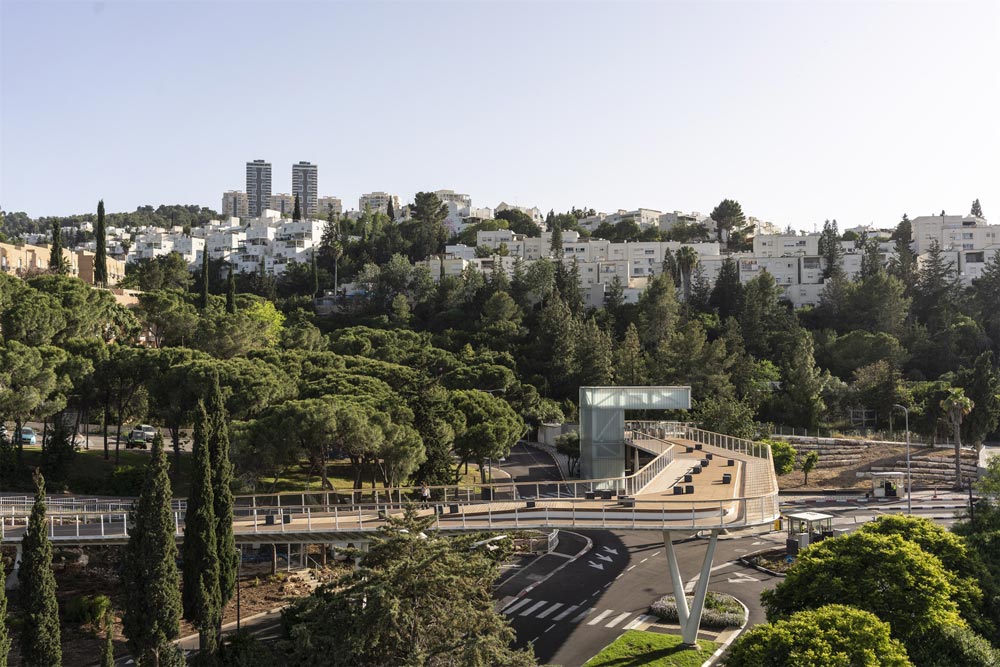 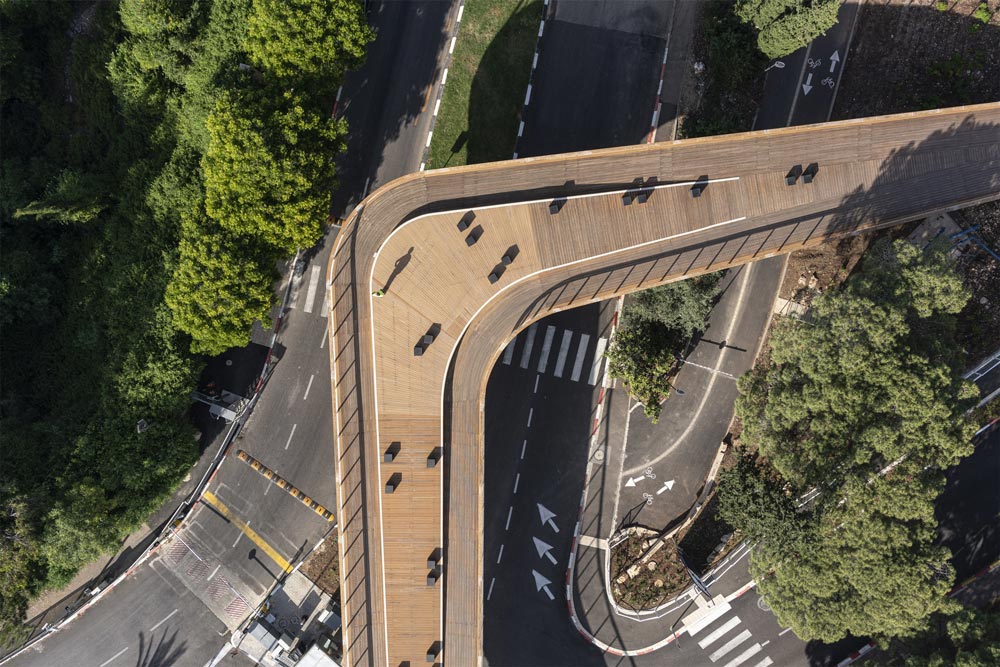 The designers identified these parameters that needed addressing and swept through it one by one, such as hovering a shaded promenade right next to Technion’s entrance that connected to the campus centre—visualizing the walkway to terminate outside the campus entrance. The new configuration imbibes a unique topographic elevation tuning a continuous movement over the existing road while capturing the near and distant views in a green landscape. The new spatial connection weaves the city and the campus elating the new public space to various activities for the students and visitors alike. 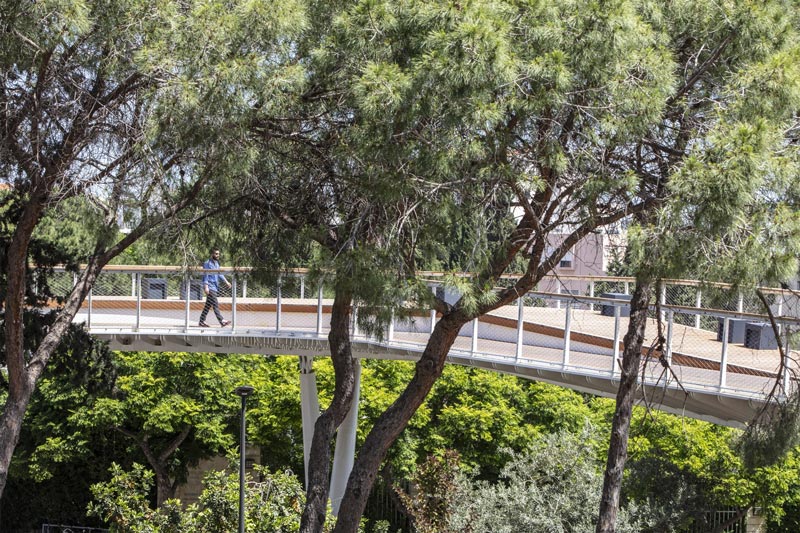 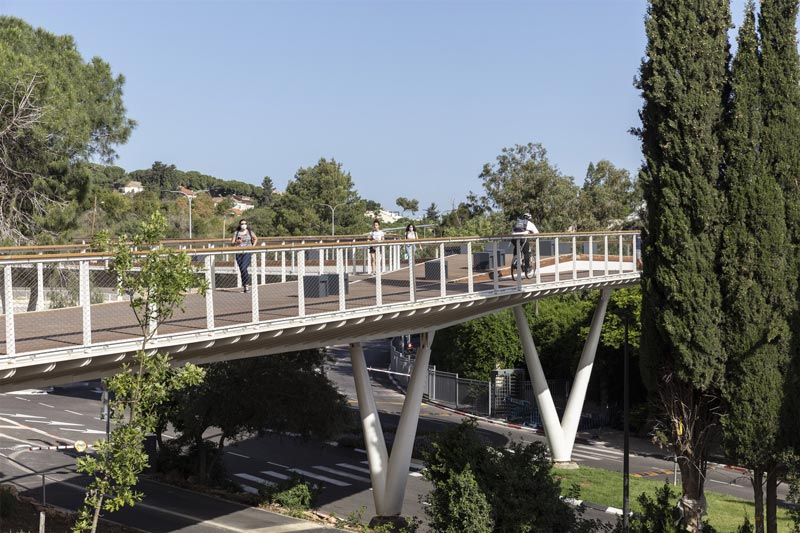 The concept of a gate is usually to separate two points of space. The new urban platform envisioned as a bridge and bicycle track is a vital link to the two existing spaces that restrains to meet. The design evolves a new urban sequence, as a green promenade that stretches from the city and passes through Technion’s main monuments and terminates in the central lawn. The entrance gate conceived in metal with bamboo decking and glass panels as a sustainable move since bamboo is one of the fastest-growing, renewable resources in the world. The erection of the bridge is made from exposed metal and bamboo decks using the basic structure as the finished exterior for the gate, thus reducing the covering materials. 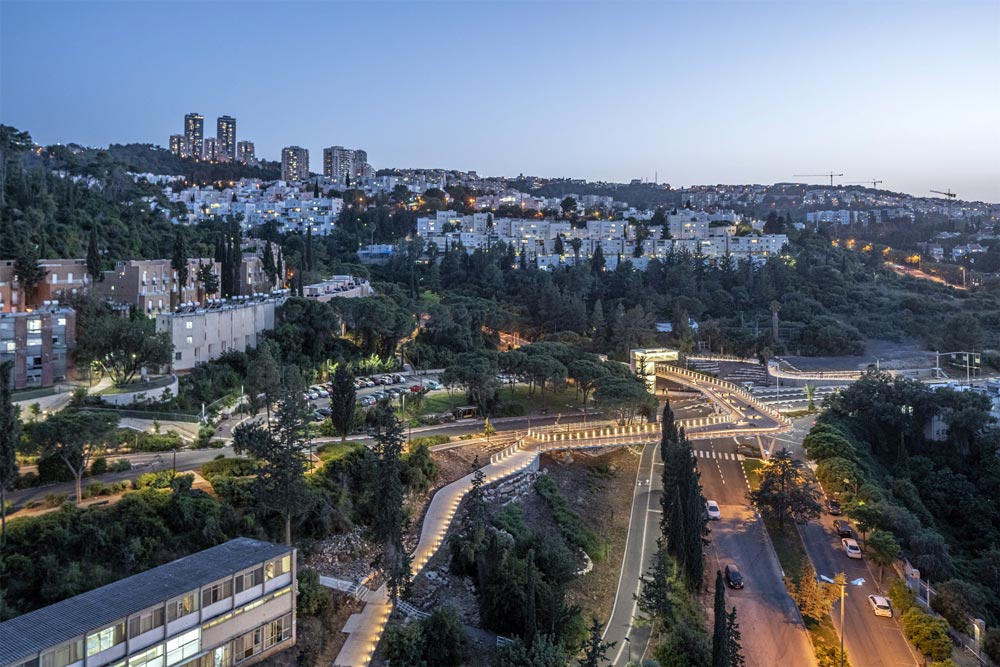 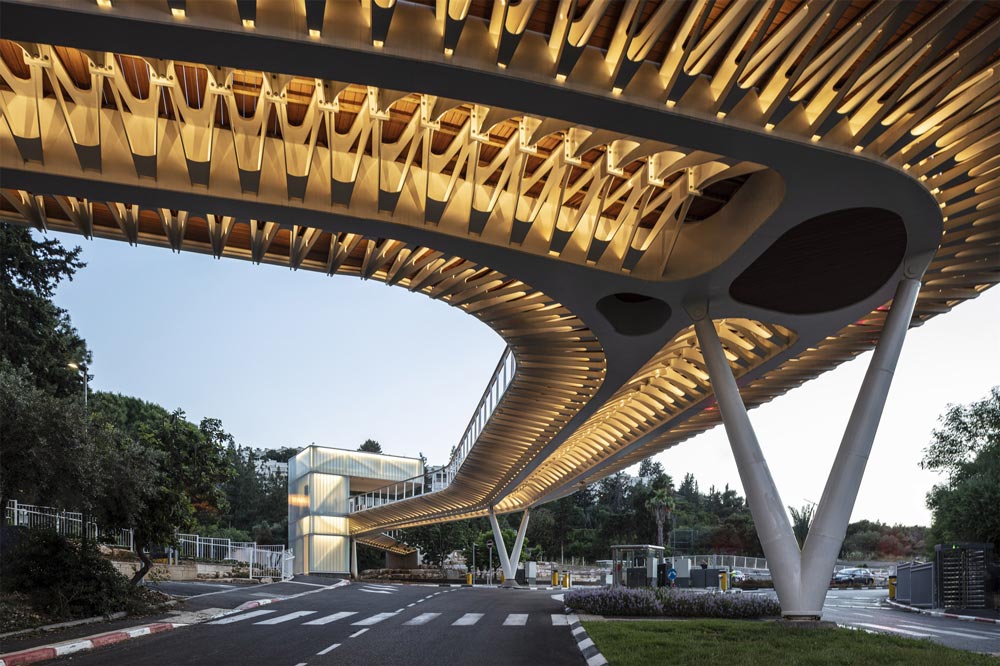 A glass pavilion slashed adjacent to the bridge extends over, with an elevator and two checkpoints. Pedestrians and cyclists use the installed automated speed gates that open with a magnetic card. They ensure ample security while monitoring the activities and safeguards with deft control.

The pedestrian route traces the contrary profile of the terrain to a position at the desired elevation for the vehicles to pass through, certifying a fluid traffic flow. After the security checkpoint, the path widens to a square, running along the declining terrain. Here the commuters are granted a dramatic view to the Haifa’s bay area and the Zyloni promenade, acting as an informal square – A waiting place, for leisure activities, for stage events, and as the initial point for a campus visit. 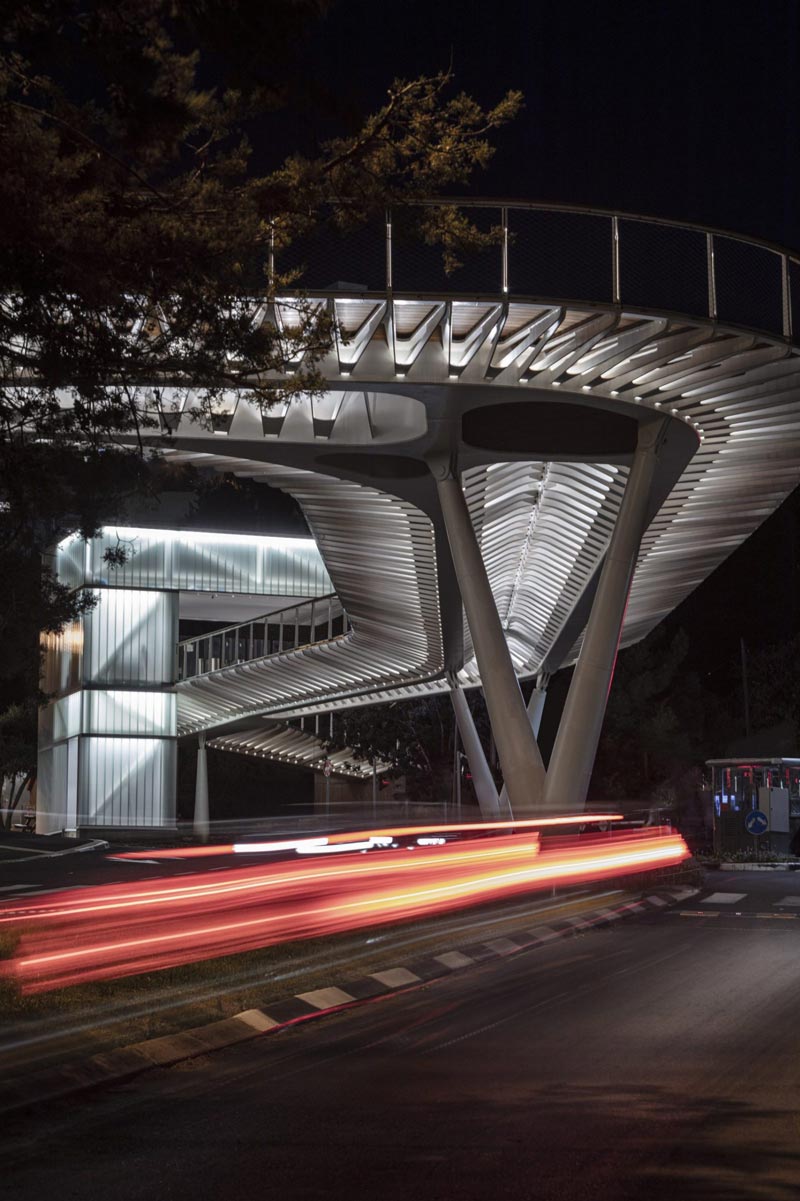 From there, the pedestrians tread towards the Ziloni promenade leading to the Rifkin dorms and further to the campus’s heart. Technion’s value of a green revolution got greatly signified at the heart of the campus. The walkway used advanced parametric tools to simplify its production. The complex and challenging shape is achieved by the conjoined performance of human capital, environmental potentials and the use of advanced technology in a functional and aesthetical admiration, admitting to the needs of Technion, which is currently becoming one of the most influential academic institutions in the world. 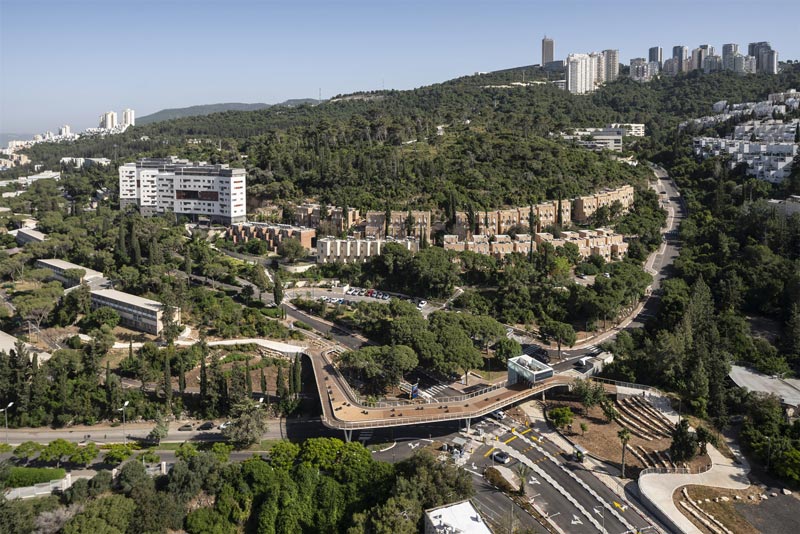