To say that Hinterhouse is remote would be an understatement. Situated in the middle of a densely forested hillside in Quebec’s Mont-Tremblant region, the guest cabin offers unparalleled privacy with nary a neighbour in sight. 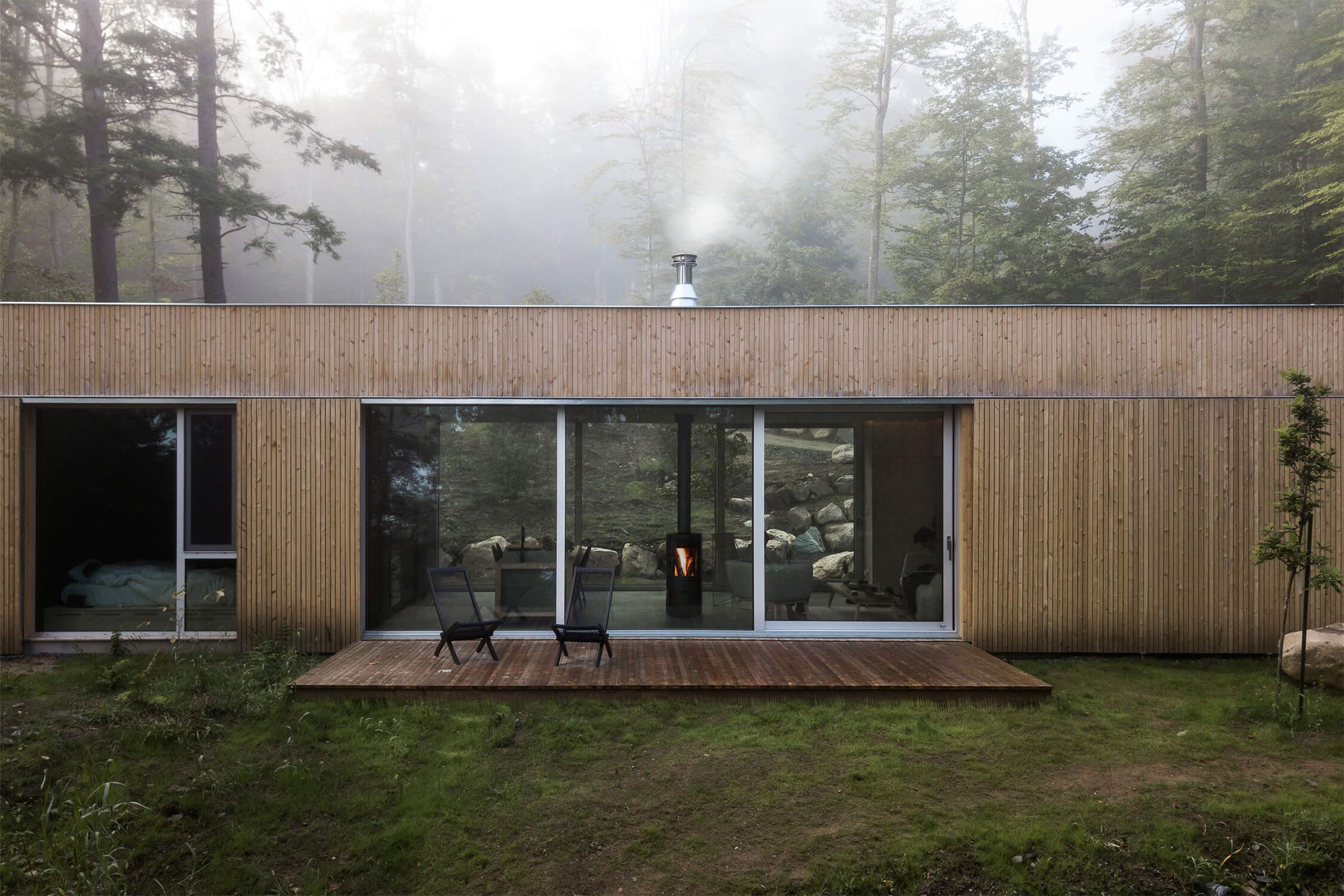 Originally, the owner, a young tech entrepreneur based in Montreal, had sourced a pre-fab modular home to serve as a private residence that would fulfill his “dream of reconnecting with nature.” But when it came time to customize it for his specific needs and wants, he soon realized that ready-made came with limitations and sought help in the form of architect David Dworkind, whose work he had discovered on Instagram (a common client-finding medium for the co-founder of local studio Menard Dworkind). 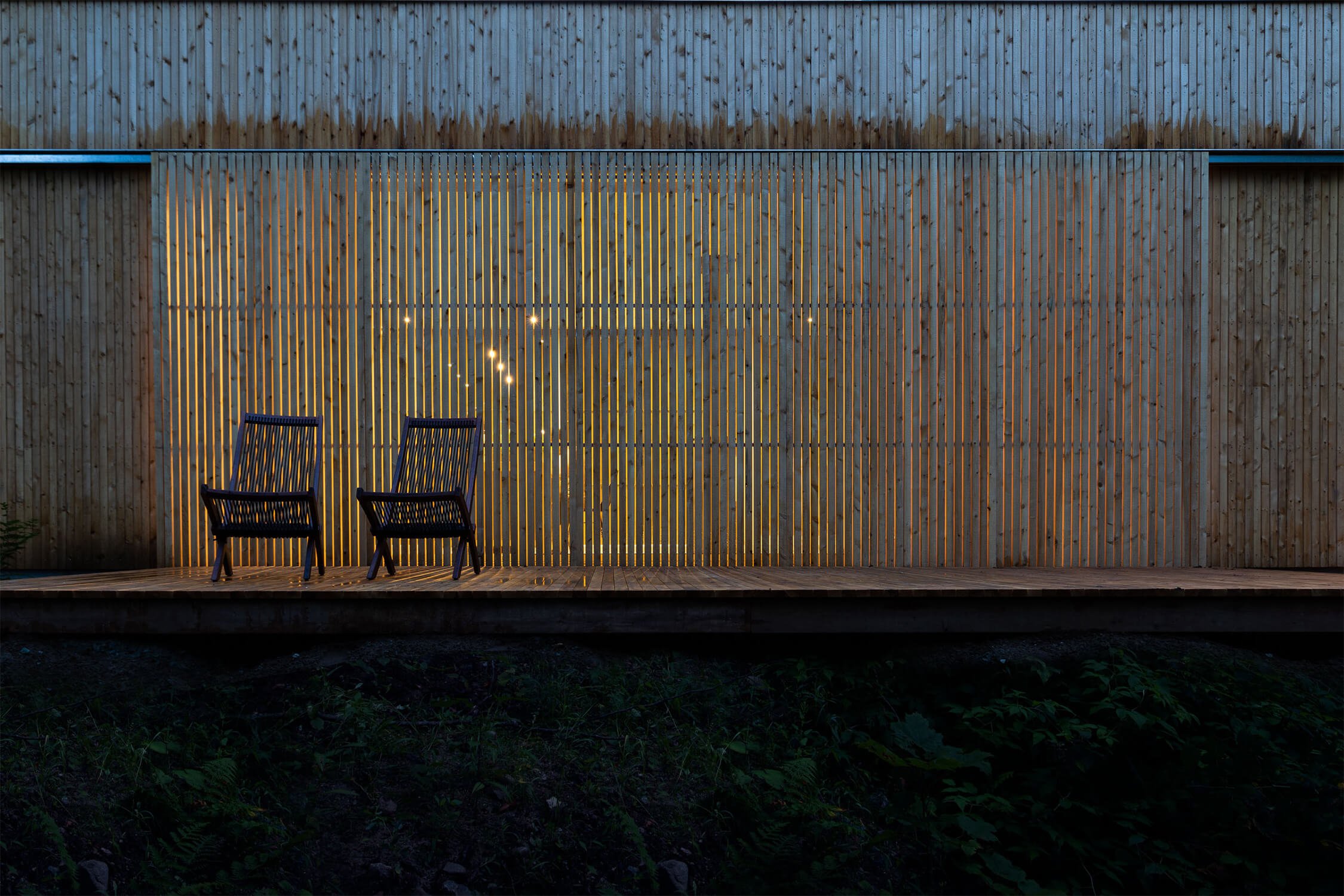 The two connected in 2017 and began planning the home while dealing with delays that the rugged locale came with – zoning and road clearance being the two biggest. “The journey was a long one,” says Dworkind, “the business model changed and there were two years where nothing happened.” During that time, the owner had decided he not only wanted a cabin for himself, he wanted to create a new hotel concept that he called Hinter Company. 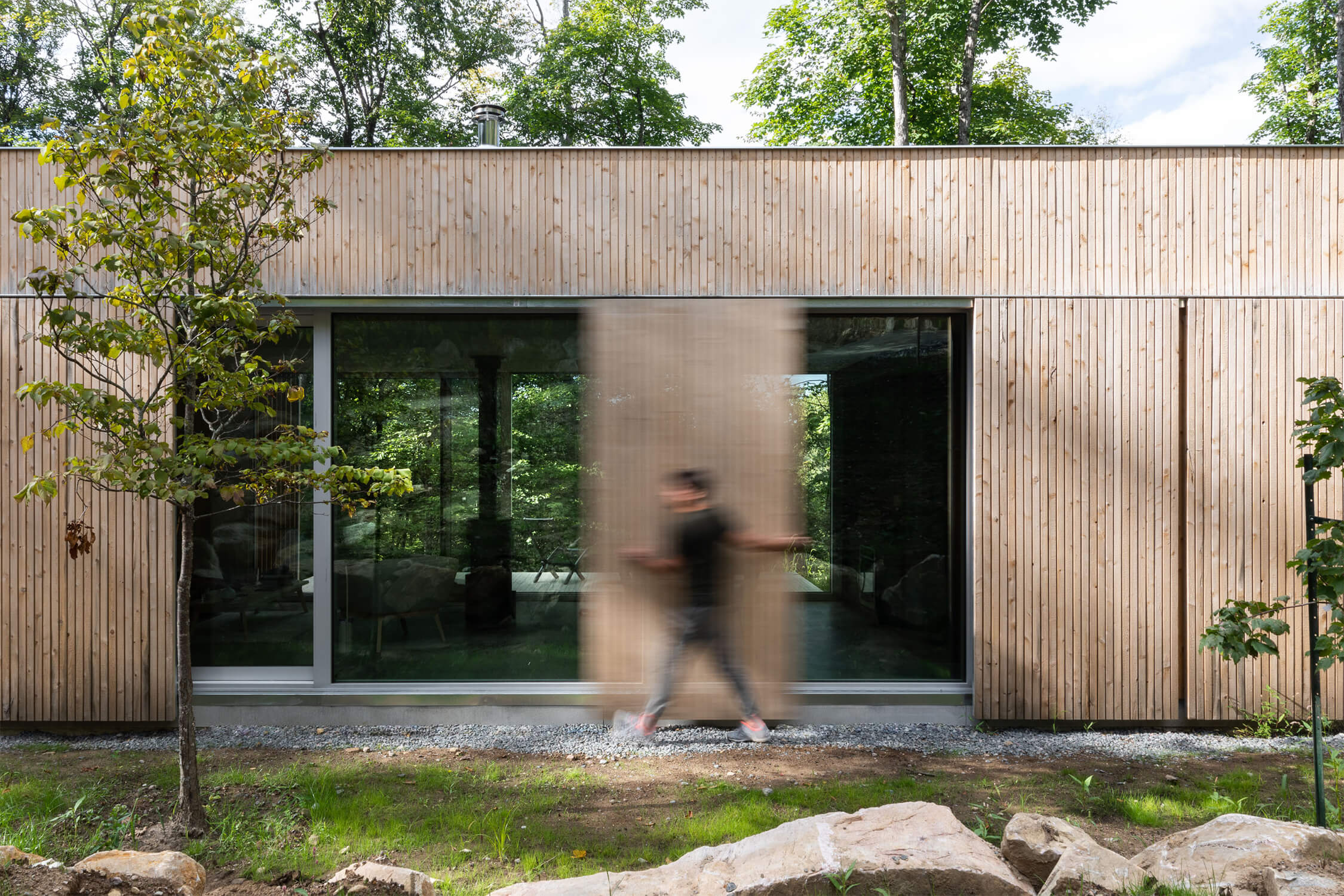 But first, Hinterhouse. For his contribution, Dworkind devised an 86.3-square-metre cabin plus a 6.5-square-metre sauna cabin a short walk away, both complementing rather than competing with the surrounding landscape. Clad in sustainably forested white cedar siding with a custom channel profile, the flat-roofed single-level structure is stunning in its simplicity. Viewed from outside, the horizontal wood siding – the material chosen to “age graciously” – makes an unpretentious impression, intentionally receding into the background. Segments of the exterior are actually shutters that slide sideways to completely close off the cabin from the elements and blocking views in. When pushed aside, light floods through floor-to-ceiling windows on either end that are aligned to perfectly frame views. Providing a unique level of interaction, the shutters also work to reduce solar heat gain (there is no air conditioning inside). “The entire cabin can be manipulated for privacy and light,” says Dworkind. 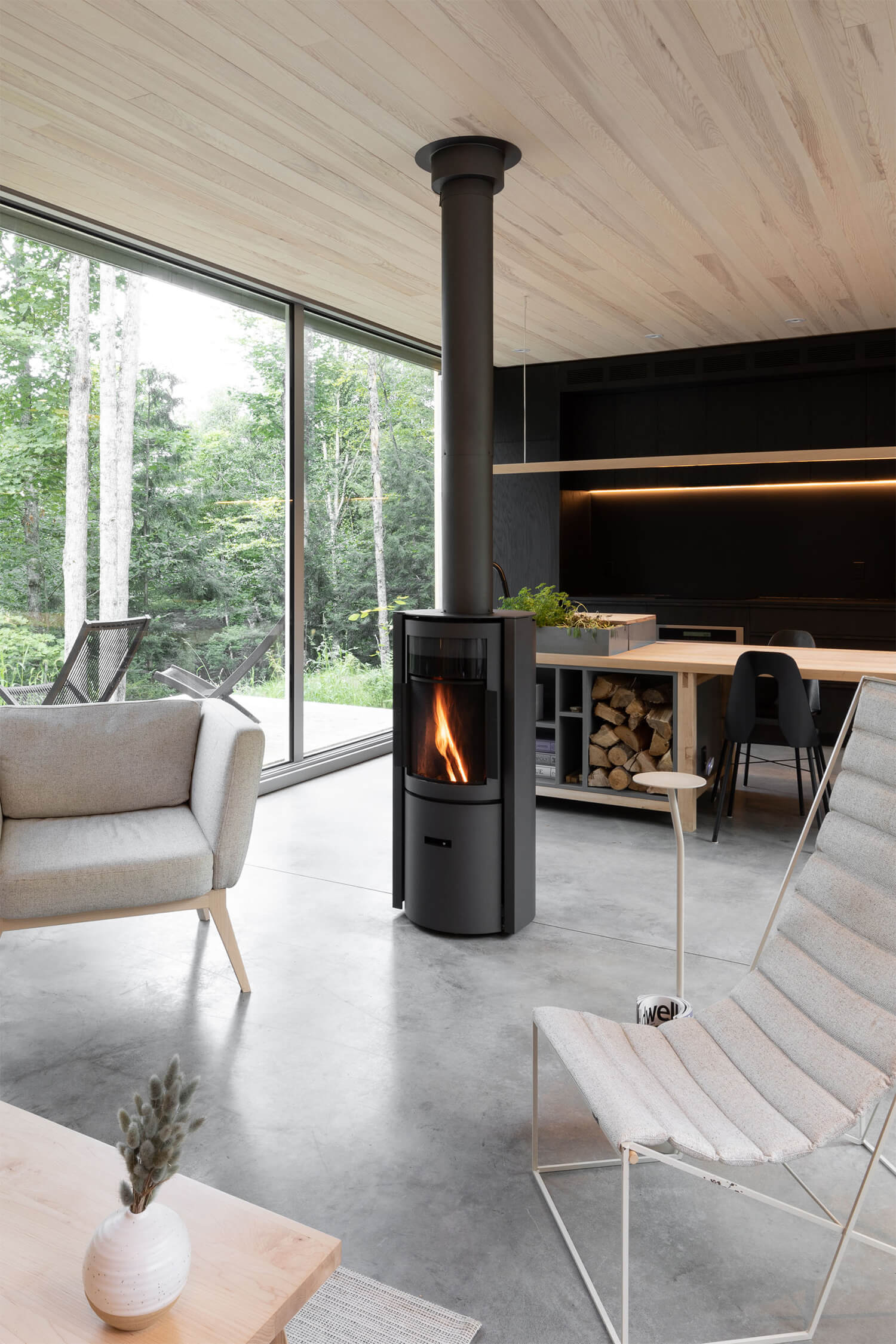 Inside, the well-insulated compact house is free from embellishment and limited to a minimal materials palette. Floors are poured concrete slabs (heated for comfort) and walls (ones that aren’t windows) and ceilings are red pine planks oiled white, creating a refined envelope. At the centre of the cabin is a wood-burning stove that rotates 360-degrees and around which the entire interior – an open-plan living and kitchen area, two bedrooms and one bathroom – was built. 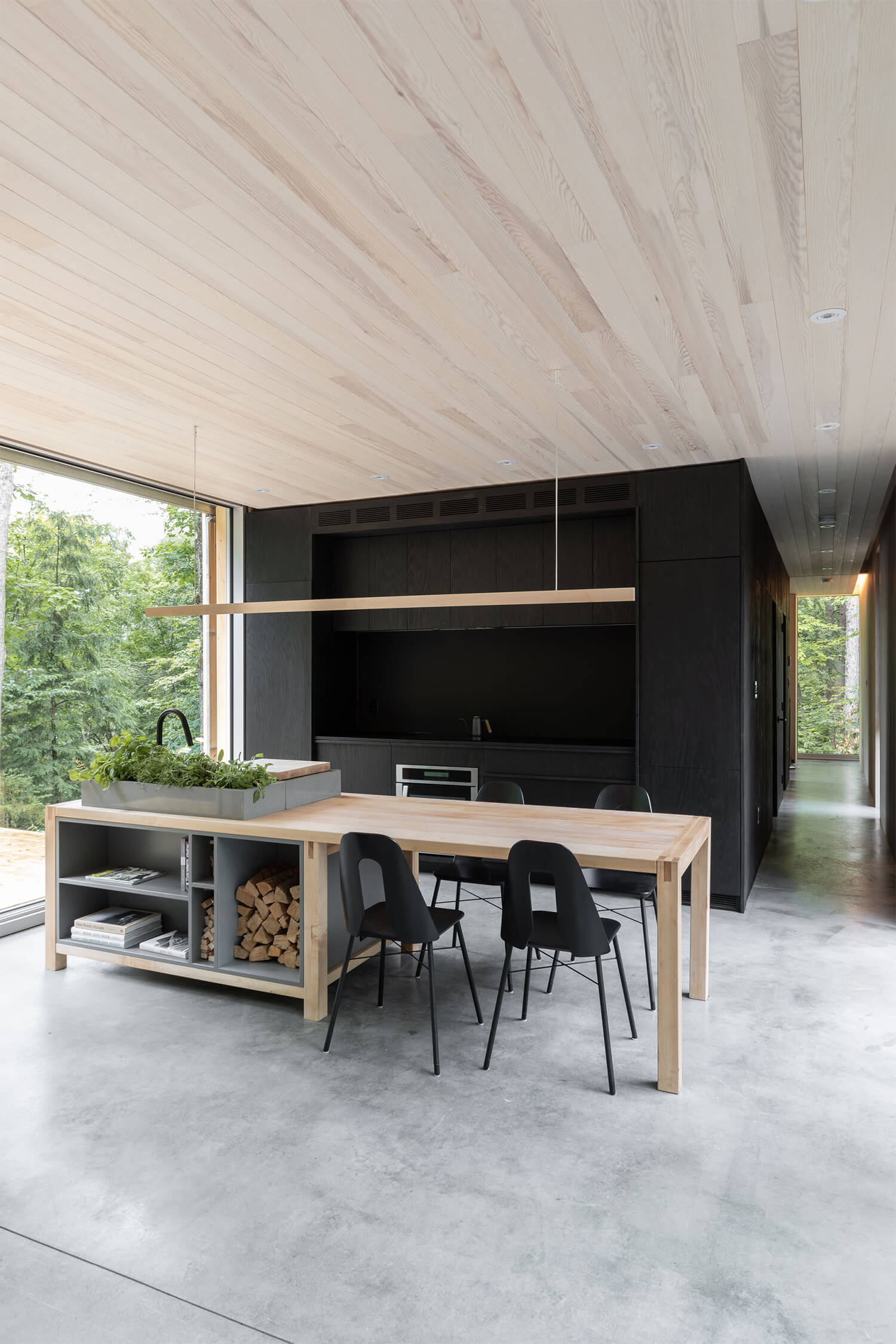 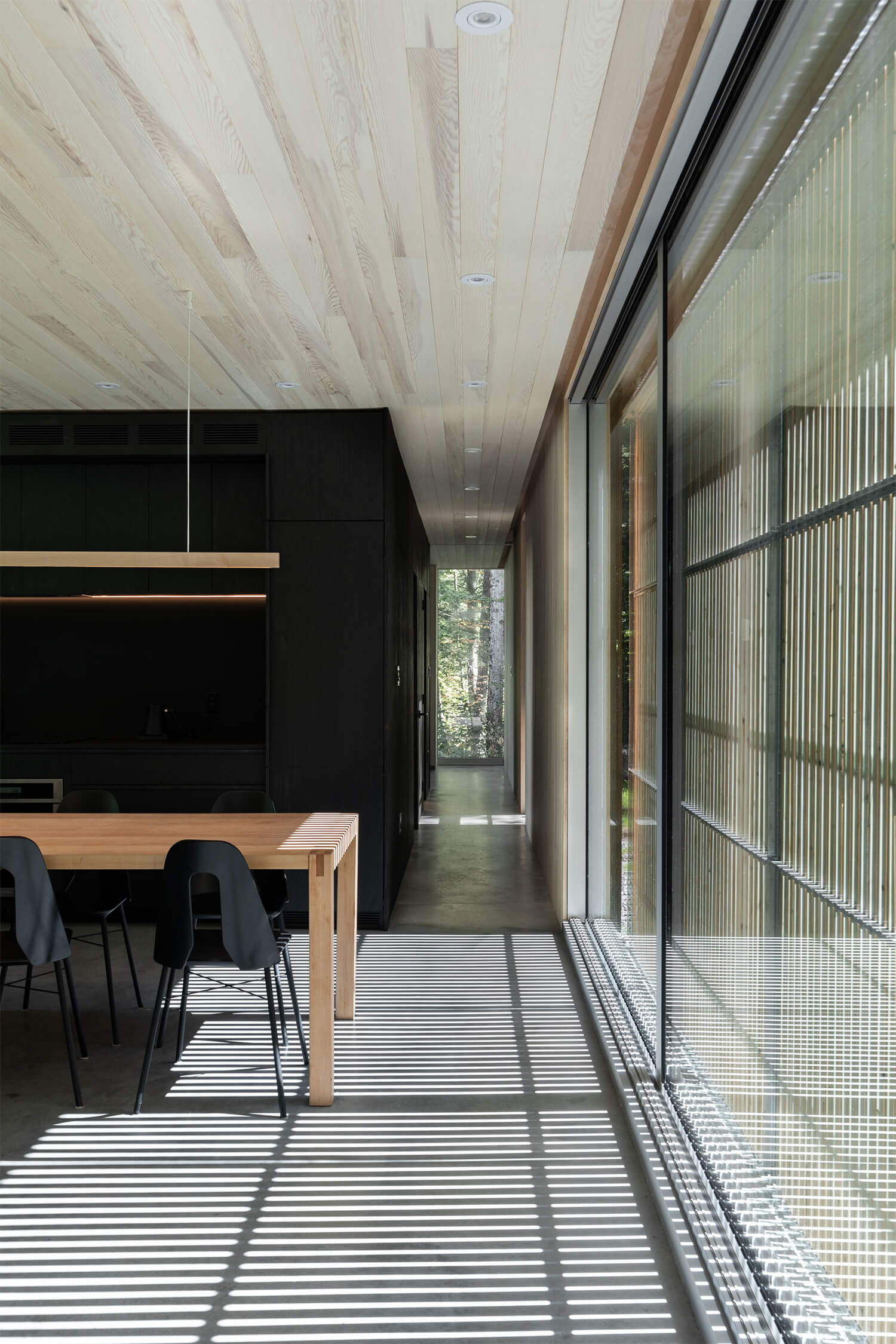 With such a tight footprint, clever space-saving interventions were introduced to make it livable. In the kitchen, an expansive 76.2-centimeter-high farmhouse-style dining table doubles as an island with a built-in vessel sink (complete with potted herb garden) and cutting board; the sink/cutting board portion was elevated to a standard working height of 91.4 centimetres and open shelving of varying capacities was integrated below. An ebony-stained Douglas fir plywood volume forms the back wall of the kitchen, housing the essentials and providing a rich contrast to the paler wood-plank ceiling.

In the bedrooms, space is maximized with queen-sized platform beds that fit snugly between the walls and storage is relegated to under-bed drawers and a wall of hardware-free cabinets. The pale-wood custom panelling also houses a darker, ebony-stained recess with a TV and extra shelving. Again, it’s interactive, with sliding panels that can be closed or opened depending on the guest. A headboard-wall of ebony-stained Douglas fir brings just the right amount of drama to the tiny space. 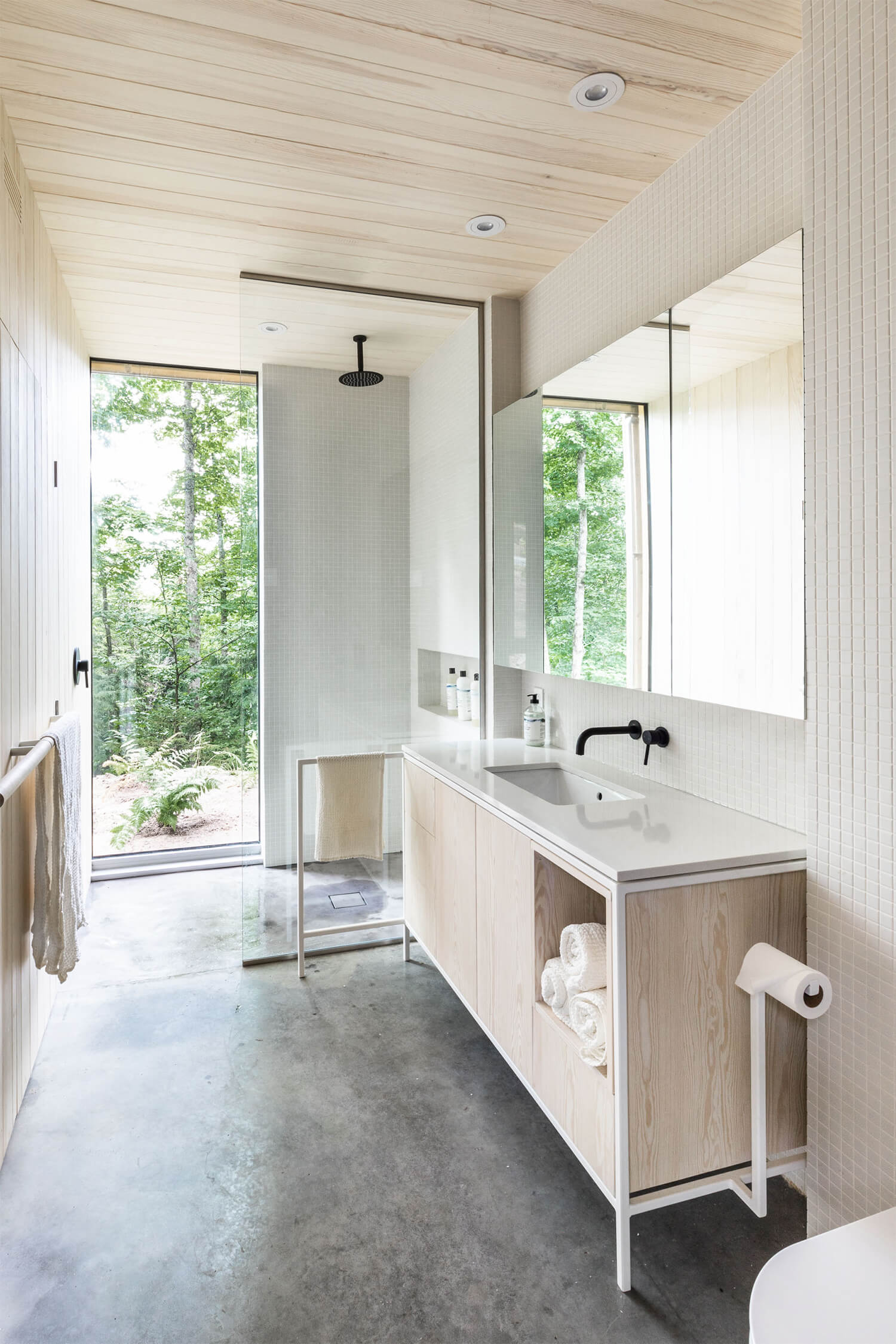 The bathroom has an airy feel with a floor-to-ceiling window in the shower area giving the illusion of being set directly outdoors. The poured concrete floor continues into the glassed-in threshold-less shower, white square tiles run up one wall and matte black fixtures punctuate the pristine aesthetic.

Simple touches throughout enhance the restrained and sophisticated character: A ceiling cove hugs the perimeter to conceal recessed blinds and indirect lighting, custom lighting fixtures are unobtrusive yet add a layer another layer of interest and modern furniture pieces are positioned to create inviting vignettes. (Much of the lighting and furniture was provided by Montreal small-batch studio Alphabet.) 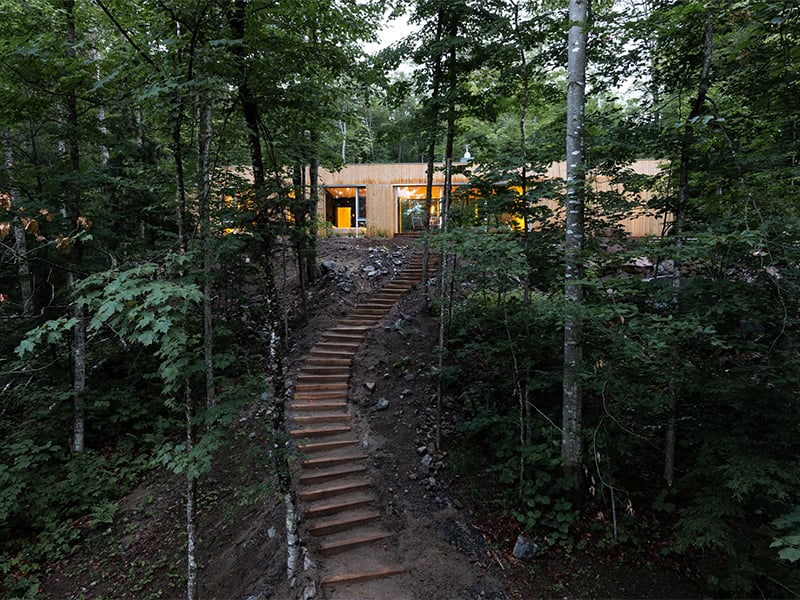 Outside and down a staircase carved into the hillside, the four-person sauna mimics the main cabin in form and material and offers a hot-cold-relax cycle Scandinavian-spa experience with an outdoor shower and hanging hammocks. 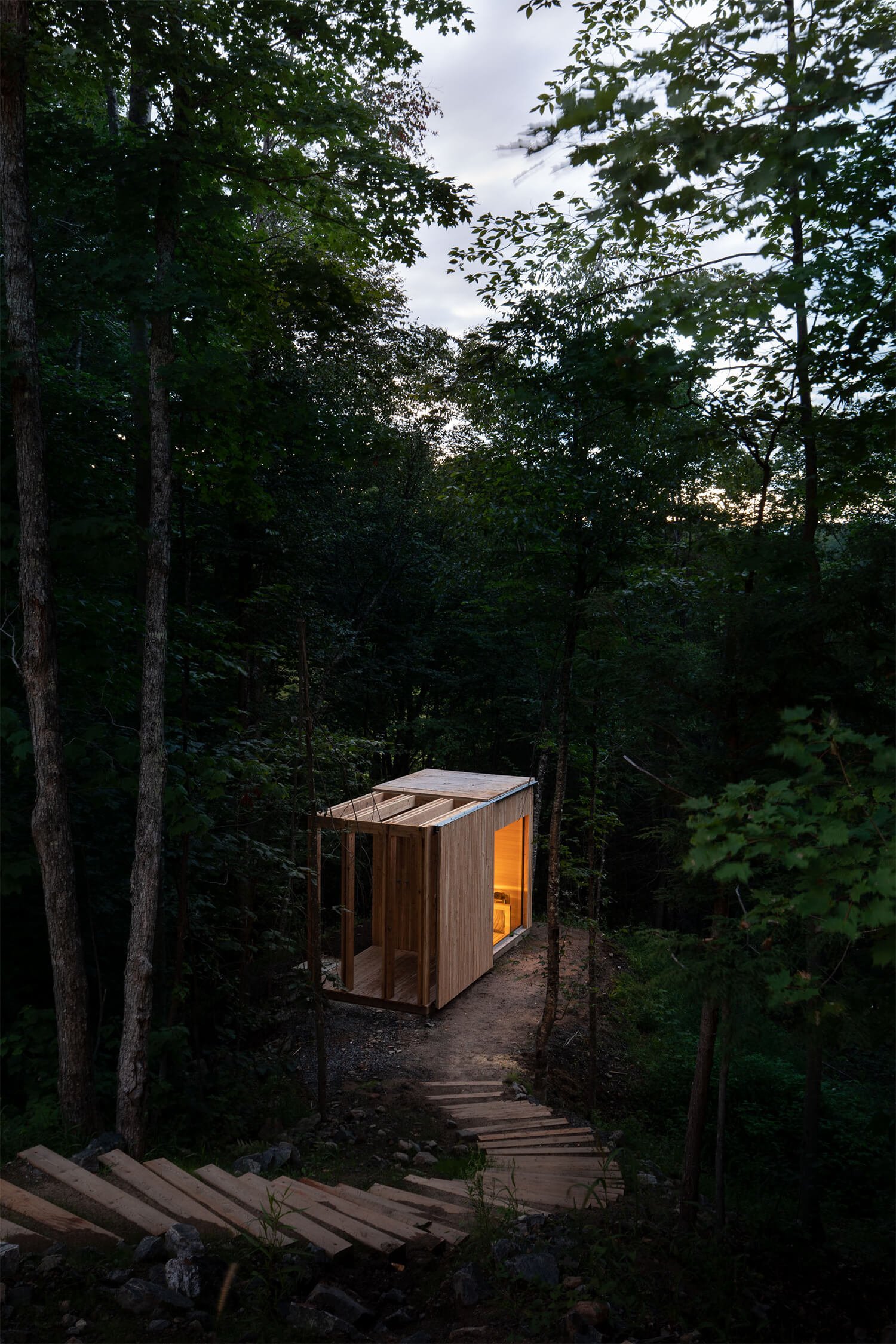 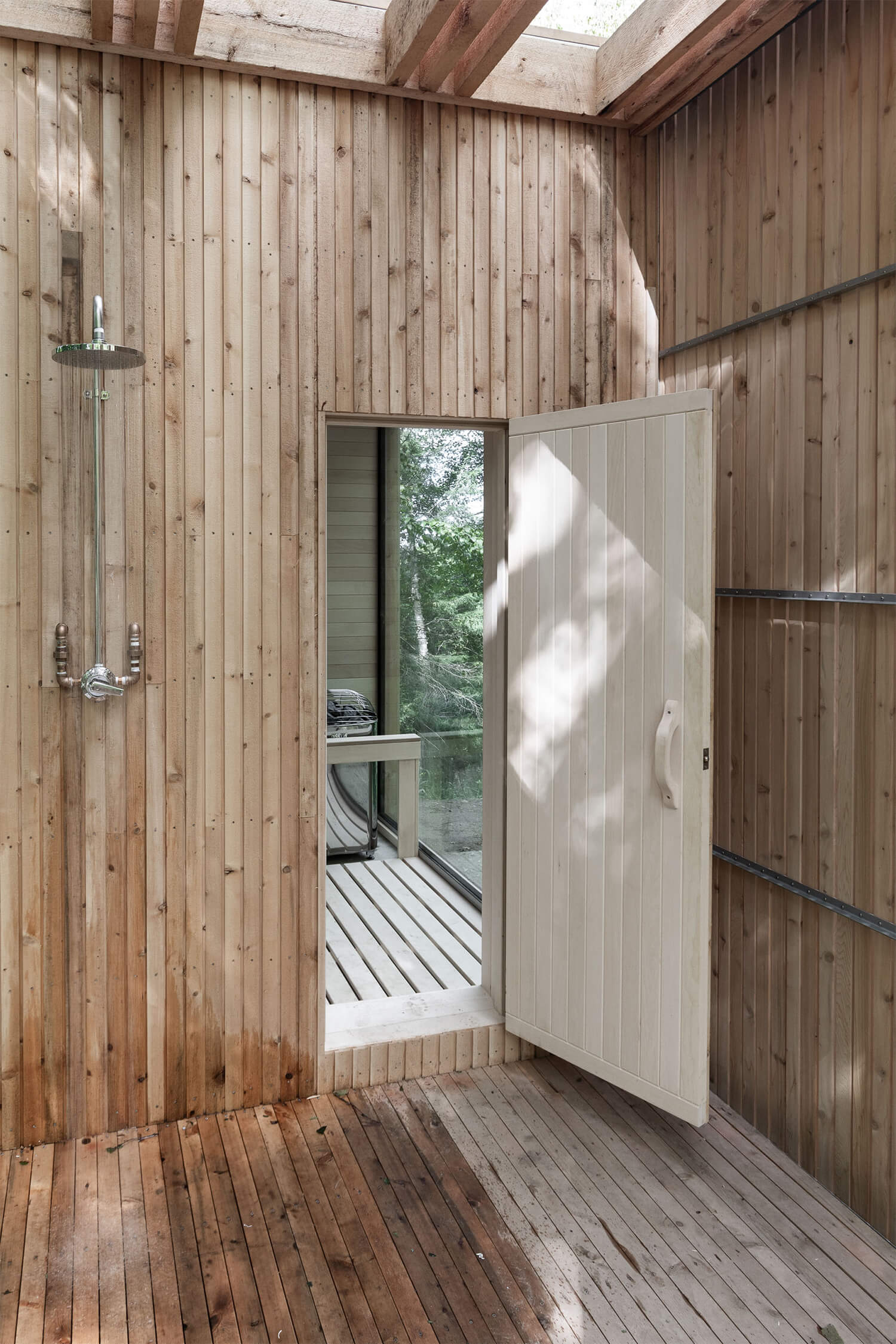 Currently the second guesthouse on the Hinter Company property, Dworkind’s cabin is a truly one-of-a-kind escape, one for nature lovers and design enthusiasts alike. And as part of the company’s focus on sustainability, it plants 10 trees for every booking made.