Previous Next
It’s the stuff of cyberpunk science fiction — tattoos adorned with flashing lights and sophisticated circuitry. They’ll monitor our vitals, we’re told, and feed us personalized health advice in real time. They’ll wire our biology to the web, and put the internet of things at — on, in — our fingertips. They’ll enhance our five senses, and perhaps even give us new ones.
This type of human augmentation is depicted in Circuits, the first episode of Glimpse, a new original sci-fi series from Futurism Studios (a division of Futurism LLC) and DUST. Watch the first episode below.Thanks to recent developments in advanced materials and biomedical engineering, wearable electronics to do all of these things may almost be here. We already have biocompatible materials that allow electronics to seamlessly fuse with the body. We’ve already developed e-tattoos that can control a smartphone.
Now, it’s just a matter of refining and improving upon those technologies.
In April, Michael McAlpine, a mechanical engineering professor at the University of Minnesota, published a study in the journal Advanced Materials in which he demonstrated a way to print electronics directly onto the skin. The device — cheap, accessible, and compact — already offers groundbreaking applications for the military and medicine. In the future, it could completely change how we interact with the world around us.
Futurism recently spoke with Alpine about his research, and the future of printable electronics and e-tattoos.

This interview has been slightly edited for clarity and brevity.
Futurism: I want to start by talking about the 3D printing technology at the center of this study. What’s so special about it?
Michael McAlpine: As a whole, our research group develops printers that can print beyond the hard plastics that most 3D printers use. Hard plastic has limited value. Not many people are going out and buying these printers, because no one at home really has any need to print hard plastic objects. So we’re expanding the capabilities of 3D printing beyond hard plastic, and toward what we call “functional materials.” That means printing materials that have some practical use — electronic materials, soft polymers, and even biological materials like cells — all on a single platform. We’re also integrating scanning and computer vision into 3D printing. 3D scanning enables us to scan the surface that’s being printed, like an organ, or a nerve. That allows us to print anatomically specific biomedical devices. Computer vision enables us to print on moving surfaces, like a hand. In this most recent study, we printed an electronic device directly on the skin. That’s never been done before. The printer is compensating both for the topology of the hand as well as the motion of the hand. So you have multifunctionality, you have tracking, you have complex surfaces, and you have anatomically accurate device matching. That’s what makes it unique.
F: The study specifically mentions military applications for this technology. Tell us more about those.
MM: The key insight we got from talking to the military folks was that they’re interested in this concept called ‘autonomy,’ meaning systems that are detached from the grid, but still have some sort of functionality. In this particular case, you can think of the 3D printing tool as a Swiss Army knife for functionality. A soldier could carry it around in their backpack, take it out in the field, and print any kind of device using only raw materials fed into the printer. 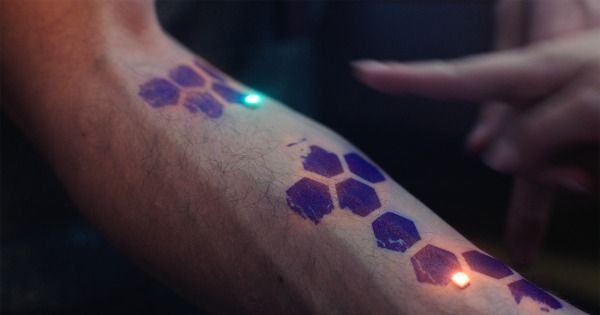